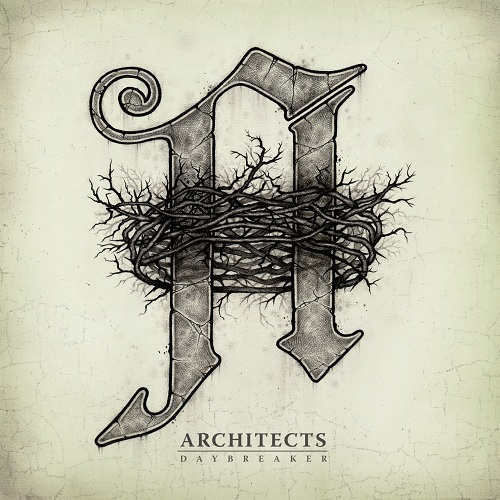 This is the fifth full length album from the Brighton, England 4 piece mathcore outfit, following on from 2011’s very popular ‘The Here and Now’.   I wasn’t all that familiar with the group prior to a workmate raving about it, so here is the dissection of the album Sensitive Stew style.

‘The Here and Now’ had garnered the band some mainstream radio airplay that, as a heavy band, they were somewhat uncomfortable with, so on this album they went in an ostensibly heavier direction, with more political, less personal lyrical content.

This album is a fairly diverse affair, with some crunchingly heavy A tuned guitars sharing space with moody, nicely composed synth sounds and some impressive rhythmically and melodically complex musical execution.  The guitar playing in particular is very good with unusual chords and string-skipping solos applied in liberal doses.  Vocalist Sam Carter’s screams are the most prominent vocal styling but he also employs some melodic crooning with some nice vocal harmonies.  This record is very well produced with all instruments occupying their own space.  The guitar sounds are particularly good with some brutal heaviness akin to Meshuggah challenging your ears and speakers simultaneously.  The drums are a little over-compressed for my liking and sound a little ‘tappy’ without much tone or ambience.  This is the new norm however and producers strive to achieve this result and Mitchell has done so well on this album.

If you’ve read this far, you’re probably thinking this must be a really good album.  It’s not.  Carter’s angst ridden screams are strange bedfellows with his emotionally weepy cleaner singing and he sounds as if he is simply arbitrarily swapping between one and the other.  Sure there is some impressive drumming and guitar work but that alone does not a good album make.   The songs are structured rather strangely with little regard for build up or crescendo and some of them end suddenly, without any closure giving you a feeling of  ‘well what the hell was that about?’   Some of the more emo….tional (haha), slower songs like “Behind The Throne” just plod along like cry-baby dirges until the totally out of place screamed vocals kick in, taking you by unpleasant surprise and ruining what merit there was in the song to begin with.  Even in the more aggressive moments there is just a real air of  limp-wristed, nauseating faux-sincerity about this record.  For a heavy band, this is really unforgivable.  I don’t for a second suggest that sincerity is inherently a bad thing, but with this style of music, sincerity must manifest itself immediately upon the listener with a focused and single-minded intensity, not an insipid, self serious plea.   Unfortunately this anaemic wet blanket of an album suffers from the latter.  Perhaps the band really do mean what they say, but it sure don’t sound like it.

“Alpha Omega” is a pretty good heavy track. “These Colours Don’t Run” features some of the best instrumental and vocal performances and isn’t affected too badly by the aforementioned lack of intent.  In fact this track is the undoubted highlight of the album with brutal chugging guitars and a comparatively impassioned vocal delivery with the lyrics dealing with  government and police corruption and it contains the only genuine rebellious ‘fuck authority’ moment with the screamed lyric “You had it all! YOU FUCKING PIGS!”

Fans of Atreyu or Bring Me the Horizon will find elements of this album appealing, as will fans of The Dillinger Escape Plan and Meshuggah as it’s a sort of mish-mash of screamo and mathcore, and contains some genuinely impressive musicianship, but on the whole, it’s just…well… boring and uninspiring really.