Slanted & Enchanted is a new & novel concept on the Perth music front: an indie rock festival carried out concurrently over two completely separate venues –The Astor Theatre & The Bakery.  It’s fair to say that it is not the type of event I would normally frequent based on the majority of the lineup, but the inclusion of Canadian noise merchants METZ got me out of the house and off to the theatre.
I took the Astor only option from the ticketing choices due to lack of interest in the artists playing the second venue. I planned on heading down to check out some bands I had never come across previously and one or two who I knew of but hadn’t investigated thoroughly for various reasons. I was excited to get of my comfort zone, which largely consists of punk & metal shows and expand my musical horizons.

Aesthetically having the show in the historic theatre was a great idea, the art-deco icon provided plenty of space to have a dance if so inspired or the option to just sit in the gallery and watch from a comfy chair and a good sized crowd of punters made use of both options. 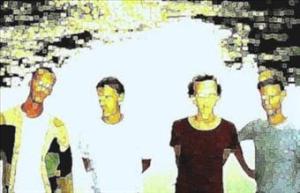 When I arrived the first band Perth had begun. They cast a striking sight on the dimly lit thespian’s boards with a movie projected on the stage backdrop (in fact when I walked in and immediately saw criminally underrated actor Brendon Gleeson on screen in full colour I knew I would be alright).  The local band are a four piece including keys who made some quite ethereal music interspersed with some rockier moments. The bass player and guitarist both handled vocals with the guitarist showing off a pretty sweet falsetto. For the most part I was very entertained with the songs being quirky enough to hold my attention and executed in a slick and professional manner. Even when I thought they lost me with the meandering opening to the final track they hooked me again with a build up to relatively bombastic finish. A nice way to ease into the night’s aural banquet. 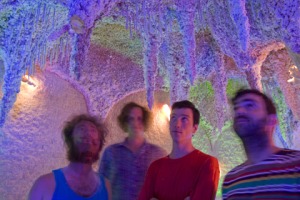 Next were Chicago “psychedelic drone” band Cave about whom I knew next to zero. I have since learned they are my new favourite band. They pulled me from my seat instantly, compelling me to bob along with the captivated throng in front of the stage. They played a brand of instrumental post rock that consisted of sprawling songs built on syncopated beats, a jangly kinky guitar sound and repetitive refrains that altered smoothly and incrementally until the song was miles away from where it began. The songs were brilliantly crafted as well as deftly performed and boasted both a level of instant gratification and a complex depth that made them appeal to me immediately.

They are difficult to pigeon hole but in search of reference point I would draw some comparisons to 65daysofstatic, Caspian or a little like Aussies sleepmakeswaves but with the cool tone and angular funkiness of Battles. They further embellished their sound by adding liberal doses of wah and occasional stabs of discordant noise from one of the guitars. The band were obviously frustrated with the increasing technical difficulties – at one point a member snarled at the desk (paraphrasing here) – “can I have something, anything from my monitor? A snare or just..anything!” I may not know any better due my ignorance of the material but the issues certainly didn’t detract from the performance from my perspective and judging by the amount of dancing bodies in the room I wasn’t alone. I will be looking this band up for sure.

The John Steel Singers were up next and soldiered on through the difficulties that were plaguing the evening’s sets to put on a very solid show. A five piece from Brisbane fronted by three vocalists/instrumentalists who did their best to reproduce the ethereal vocal harmonies of their recorded material in the face of the malaise that was the failing setup. Their sound was punctuated by crisp bass that cut through nicely and conspired with the punchy drum beats to provide the knee wobbling, toe tapping aspects of their sound which was filled out ably by a dude whose duties seemingly were triggering electronics, occasionally blowing a wind instrument and dancing around drinking beers a nice role in a band and a nice touch to their sound.

They quickly had the room getting down to their danceable ditties and kept it jigging along throughout. The guys didn’t let the continuing inconvenience of equipment failure drag their mood down and they carried the vibe brilliantly in face of adversity. They play interesting, occasionally sprawling songs with a hefty dose of pop sensibility ensuring the aforementioned danceable aspects provide the kind of instant hooks that quickly wins over an audience.

And so to the reason I was there – METZ. The Canadian three piece have been creating extensive buzz since dropping their debut on legendary label Subpop last year. Their brand of what I call ‘shambolic rock’ ( I mean that in the nicest possible way ) appealed me from the first listen and I was excited to witness their already renowned live show. And they didn’t disappoint, a jarring change of pace from the indie stylings of the previous bands they exploded like a super nova of raw energy.

They definitely ramp up the intensity for their live performances giving the songs an even more raw edge than on record. The vocals are more prominent and seemingly delivered with more passion and aggression live by the singer/guitarist who literally throws himself into his performance. He is perpetual motion as he flails around slinging his guitar whilst yelping and barking the vocals. The drummer hits the kit like it dishonoured his family Kung Fu movie style and the bass player holds it together by bringing a wonderfully full and warm tone that creates a wall of bottom end. METZ left the stage drenched in sweat to the rapturous applause of a grateful and satisfied audience. I see big things for this band in the near future.

After the sonic boom of METZ came indie darlings Deerhunter whose more considered and comparatively gentile style sounded positively dreary after what preceded it. The slow burning opening track served as a vacuum that sucked the vibe right out of the room and despite having a throng of faithful front and centre the start of the set fell flat.

Unfortunately Deerhunter were also not immune to the dramas that continued to affect the performers all night.  Being a five piece with a pretty large sound they were possibly more affected than others. The sound was a wash of noise at times with the only thing cutting through initially being the singer’s unique vocals, which to be honest I found grating at times early on, as he seemed to struggle to find his pocket (he very likely couldn’t hear himself). There were a few extended breaks between the first few songs as band and crew desperately attempted to rectify the issues with limited success. During these protracted breaks the front man regaled us with some quite bizarre banter including a story about when he ”was a puppy” and he ripped out a puppy Rottweiler’s throat to save his puppy friend… who doesn’t love a wacky dog murdering anecdote between tracks? It was obviously an attempt at irreverent humour that I thought failed miserably but maybe I just didn’t get it.  It wouldn’t be the first time.

Things improved dramatically around the third track when the band opened things up a bit and the maudlin mood of the gathered punters improved enough that they even danced a little. For me Deerhunter were at their best when they either picked up the pace and energy or conversely stripped it way back so the instrumental by-play could shine and the light and shade in the songs could come through, the mid-paced dawdlers dragged a bit and didn’t capture me the way I hoped. They write interesting music and obviously it resonated with plenty of people but I couldn’t get with them on this occasion. It’s probably not their fault they make music that is unlikely to win someone like me over on the first viewing but I call it as I see it and frankly they bored me and were a buzz kill after the crescendo of the METZ performance.

So home I shuffled as the kids made their way to the next venue for the next chapter of Slanted & Enchanted which was to take them through to the wee hours. I had had my fill by that stage, it was a different experience for me but one I really enjoyed and the festival is a fantastic concept that I hope was successful enough to have a future. The sound issues were obviously disappointing and did detract from some performances and clearly frustrated some of the bands but I personally still consider the event a success from a musical standpoint, which is testament to the abilities of the acts on the night.

In all it was an entertaining evening of diverse and interesting music and it got me to set foot inside a theatre… wonders will never cease.