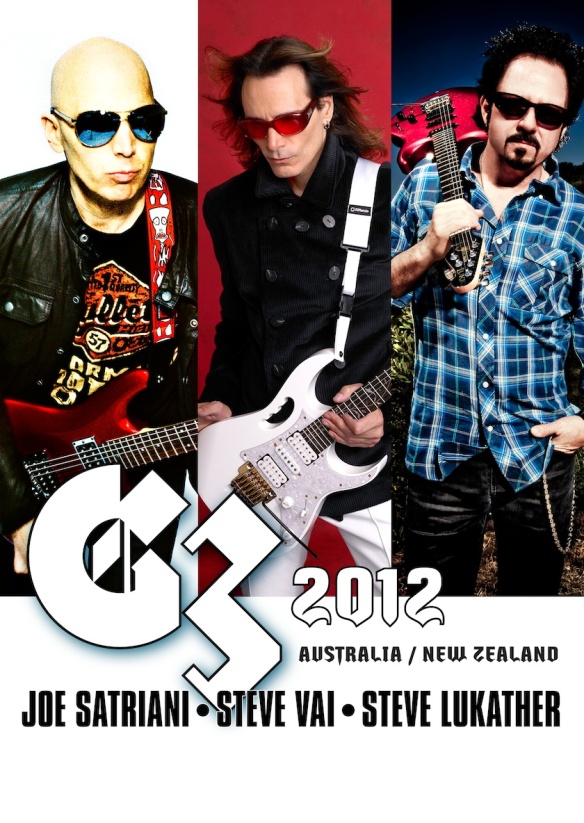 I’ve previously resisted the urge to see earlier incarnations of G3, but the inclusion of Steve Lukather (Toto, Michael Jackson) sealed the deal, and I happily went along with my good buddy.  Having never been to the Palais before, I can honestly say I was impressed.  It’s a lovely theatre and we were seated in the balcony right in the centre with a great view of the stage.

For the uninitiated, G3 are a live touring show consisting of guitar gods Joe Satriani and Steve Vai, with a continuously changing 3rd member.  I knew from the outset that this was to be no ordinary rock gig as messrs Vai, Satriani and Lukather are regarded in guitar circles as amongst the best guitarists ever to have plucked a string.

The format was fairly simple.  Each guitarist played a solo set with their own backing band before they all joined each other onstage, jam-style for the final set.

First up was Steve Lukather, famous for his work with AOR rockers Toto and his session playing for the late Michael Jackson.  His set was initially quite reminiscent of Toto, stylistically being melodic hard rock, but he quickly moved into more adventurous territory, incorporating latin themes and some great, jazzy Herbie Hancock inspired funk.  Clearly, he was included in the lineup for very good reason, he is an excellent, versatile guitarist and he produced some superbly executed solos, utilizing beautiful volume swells and some amazing right handed glissando work over the top of his left soloing hand.  He did, however make a slightly lame attempt to get the crowd worked up, demanding they clap along to the first song of the night.  Suffice to say, not many were in the mood for clapping at this early stage, but I thoroughly enjoyed his set and there was a quick break before Steve Vai.

When it was time, Vai slinked onstage to rapturous applause, with good reason.  He is regarded by many as the best shredder in the business, having played for Frank Zappa, David Lee Roth and many others whose names unfortunately escape me at this point.

Of the three guitarists, Vai is by far the most theatrical.  Adorned in a paisley shirt, he grooved and moved about the stage in an almost serpentine fashion while playing legato licks of intense speed and precision.  He had a real laid-back, laconic quality about him for much of his set, and a lot of his playing was done with nary at look at the fretboard!  Flashy he may be, but he also incorporated some very tasteful and melodic slower soloing to balance things out nicely.  Switching his signature Ibanez Jem guitar to one with blue LED lights instead of fret markers, he cut absolutely loose on the poor instrument, brutalizing the tremolo arm with magnificent cruelty and conjured sounds so otherworldly that they momentarily made me forget what species I was!

It was a terrific crescendo to end his set on and whet the crowd’s appetite for the rest of the night’s proceedings.

Another quick break and enter Joe Satriani. In complete contrast to Vai, he was dressed in conservative black, and his band consisted of just him, a drummer and a bassist.  Of the three guitarists on show, Satch, in my opinion had the best combination of ungodly speed and tasteful riffing, blending lead and rhythm into one magnificent, mellifluous whole as only a true virtuoso can do.  He is the master of his instrument and at times it seemed as if the guitar was just an extension of his imagination and he was just thinking the notes at the awestruck onlookers.  He played some instantly recognizable tunes from the classic album “Surfing With The Alien” and gave the impression that he was enjoying himself immensely for the duration of his set.  So very important in a live performance, and I can say, without hyperbole that the crowd were enjoying it tenfold!  Hats off to Mr. Satriani.

After some brilliantly efficient work from the road crew, all three guitarists joined each other onstage with a keyboard player/guitarist (who I’m told played with Frank Zappa), a bassist, drummer and rhythm guitarist.  This ensemble proceeded to play extended versions of Zappa’s “My Guitar Wants To Kill Your Mama”, Hendrix’s “Little Wing” and Neil Young’s “Keep On Rockin’ In The Free World”.  It was an amazing sight (and sound) to observe these three legends of guitar all together at the one time.  They played at times separately and at times together, producing some amazing three part guitarmonies.  They dueled with one another and with the keyboardist, making me reminisce about Vai’s cameo in the film “Crossroads”.   It wasn’t all about them either, with most of the backing band getting their own solo moments in the sun.  At the conclusion of “Keep On Rockin’…” they finished their performance and received a rapturous standing ovation, the likes of which I’ve rarely seen.

A lot of you may be wondering whether, at times, the show drifted into wank-a-thon territory.  Of course it did and I was slightly jaded at certain points in the show, but to dismiss it as mere wankery is to miss the point.  It wasn’t a normal rock show or pub gig. It wasn’t an arena spectacle and it wasn’t an intimate evening with singer-songwriters. This was a unique event that showcased and emphasized beyond any doubt, the talents of arguably the three best guitarists in the world.

I bought a T-shirt