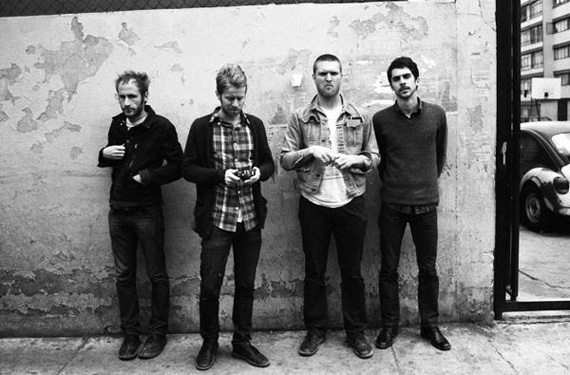 Los Angeles alternative rock band Cold War Kids have built a reputation for putting on a brilliant live show and I was excited that this was to be my first chance to see them in person. They had extended their stay after their Splendour In The Grass appearance for a run of shows around the country with tonight’s Perth show a sell out.

We arrived early to stake out a spot and the venue was filling rapidly as the only support of the evening – New South Welshmen ‘Cabins’ took the stage with the place  packed by the end of their set.

I had done zero due diligence on Cabins and must confess to not even knowing their name at the start of the night (rookie reviewer mistake – lesson learned!) but they were impressive.

For a support band Cabins sure chose a few bold moves – they opened with a slow burner which didn’t immediately grab the largely unfamiliar audience – unusually gutsy I thought, they played a cover early and the singer had a failed and inappropriate attempt at humor between songs (something I can completely relate to, but he may need to read the audience better as the reaction around me was mostly “what the fuck?”)

Cabins play a perfect brand of rock ‘n’ roll for this situation. They built the set up  nicely over the opening few tracks and had most of the room bopping along by the mid point. They were tight and cohesive with well written songs that were accessible enough to capture my attention and for the most part different enough to keep it.

Their influences may be obvious and their stage presence may need some very minor tweaks but I really enjoyed their set and I think most people there did too.  If you fancy checking out some good up and coming Aussie talent have gander at their Soundcloud.

So the wait for Cold War Kids to make their entrance was mercifully brief and the members walked out to a warmly raucous reception. After a quick yet polite greeting they began a set that was light on pomp and circumstance yet heavy on awesome.

This show was a study in how brilliantly considered and conceived music performed with ability and passion can hold a room full of people enveloped in a communal happy place. Vocalist Nathan Willett is a transfixing front man, his distinctive voice and delivery oozes passionate emotion. He conveys each song with sincerity and wholeheartedness whilst the rest of band compliment his swagger beautifully.

The live experience of CWK is made all the more impressive and interesting by the multi-instrumental skills of several members. Willett sings, plays guitar and plays piano through out set, sometimes switching instruments within a single song. The recorded unit of Dann Gallucci (guitar) Matt Maust (bass) and Matt Averio (drums) are joined in the live setting by Matthew Schwartz (keyboards, guitar & backing vocals) The switching between instruments throughout meant a constantly altering dynamic that the band have mastered control of. This is clearly band that knows what they are doing and how to manipulate a set, and therefore an audience, to its will.

There is no gimmicks with this band’s performance, simple lighting used effectively to compliment the atheistic of a moment, minimal yet appreciative and sincere band-crowd interaction (including a confused exchange between the singer and a female punter he said “was either way too drunk or had too thick of an accent” for him to understand)

Cold War Kids simply played a cross section of tracks from over their career with the ability and confidence that their reputation suggested.

Every member had complete command of their instruments and their role as they immersed themselves deeply into the performance of songs that shine without the superfluous bells and whistles used by so many others as a distraction. In terms of musicianship all members greatly impressed me with special mention to guitarist Gallucci whose ability to provide soft complimentary touches or bursts of discordance with equal ease is awesome to watch. And a shout out to drummer Aveiro for at one point playing the drums with a maraca, which is simply something I never seen before.

The setlist met all my hopes and expectations with my favorite tunes all getting an airing and every one of them sounding fantastic. Songs from their breakout debut album ‘Robbers & Cowards’ seemed to be best received and the atmosphere went up a notch during ‘Hang Me Up To Dry’ & ‘We Used To Vacation’. A standout moment for me was the performance of personal favorite ‘Hospital Beds’ a song soaked in emotion that was delivered beautifully to an audience who reveled in every note. Also amongst the highlights were newer tracks ‘Miracle Mile’ & ‘Royal Blue’

The fitting crescendo of the night was reached during the final track of the two song encore ‘Saint John’ which was another that became a communal sing along for many of the adoring attendees. The vibe in the crowd was great all night with so many people clearly having a ball and many (myself included) enjoying a damn good dance.

So despite my having very high expectations for my virgin Cold War Kids experience I left extremely satisfied. It was a great example of mature, well-constructed music played with passion but without pretense. A very fine show indeed.