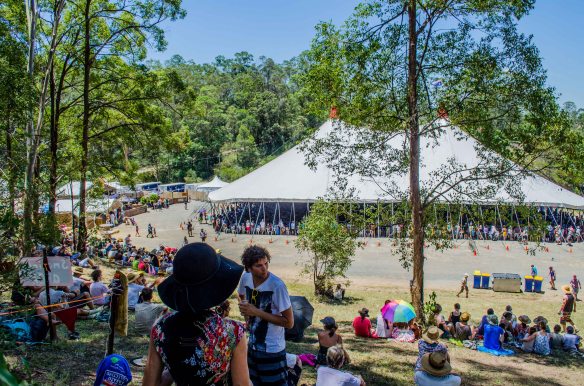 The festival scene in Australia has been called dead, dying and ultimately waning in popularity by everyone in the industry and with only a few successful festivals across the country every year – it’s a hard point to counter. Obviously there are few detractors who attend the annual Woodford Folk Festival, because if this year’s numbers are anything to go by; this festival scene is alive and kicking. As usual, we chose to attend only one of the seven days (purely for financially reasons) and as usual we were not disappointed.

Woodfordia is one of the best festival sites/properties in Australia and rivals sites such as Lorne for Falls Festival and Peats Ridge Alternative for its sheer size and scope. 2013/2014’s lineup was again an eclectic mix of obscure, a smattering of well known Australian and a select few high profile International artists throughout the seven days. The biggest drawback for the festival is always the weather. Years gone by have seen a complete mudbath from day 1 or in the last few years; sweltering heat. We were lucky enough to experience both extremes in the one day we were there, the 29th December 2013. 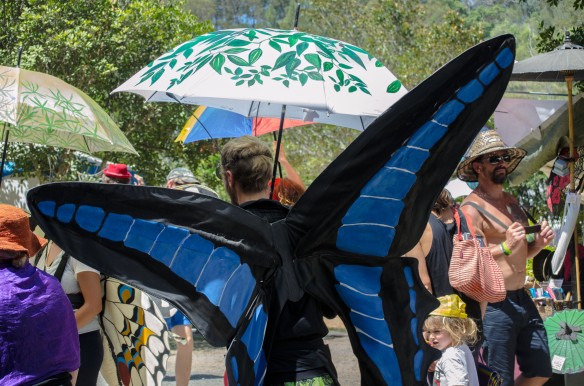 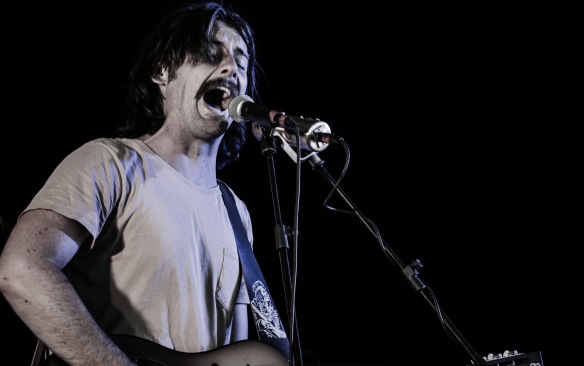 I think a lot of the artists at the festival only get crowds because people are escaping the weather and Junior Bowles was no exception. We were just there to escape the 40 degree heat and to wait out the gap until Jordie Lane hit the stage. Rocking some classic blues and dirty southern sounds, Bowles was not the worst thing you would see at Woodford on any year, but not something I would return to see either. The sound guys needed to be shot on this one, but as Stew would say, at least he had a good guitar. 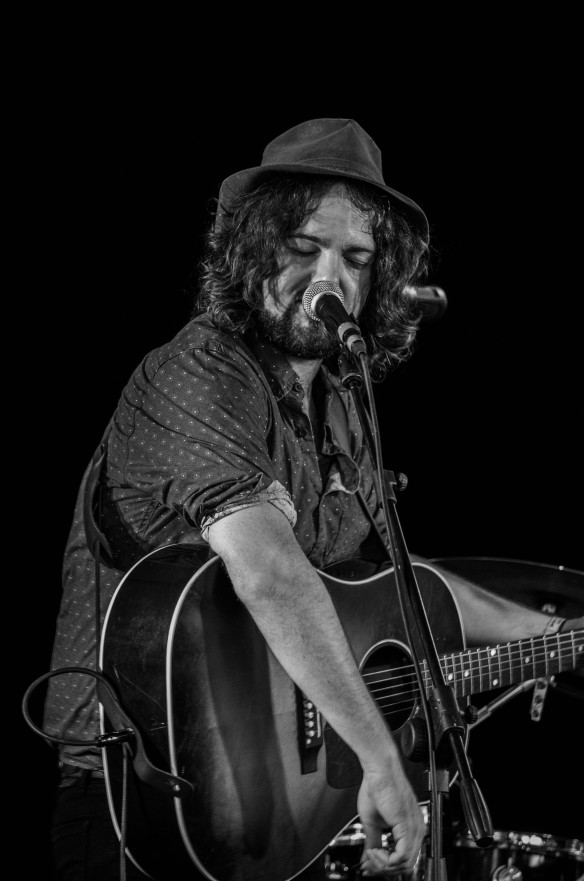 2pm saw the awesome Jordie Lane hit the stage and despite the sweltering heat and the zonked out audience, Lane never skipped a beat. He is a seasoned performer of blues, roots and folk and is an extremely accomplished guitarist and vocalist. The thing I like most about Lane is his brilliant story telling in between songs and alongside the wonderfully accompanied vocals of songstress Clare Reynolds, Lane had the audience glued to his every song.

This is not surprising though, With Jordie Lane being one of the incredible Australian Comedienne Denise Scott’s children. Lane has entertainment in his genes. 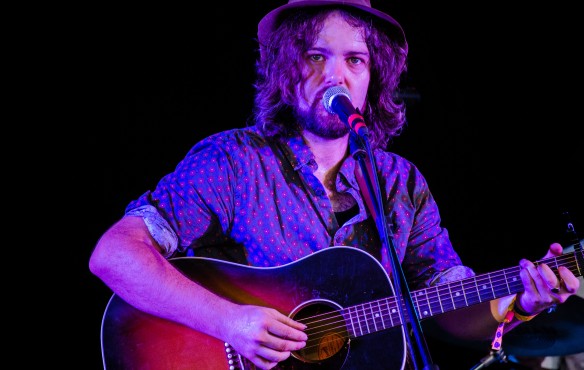 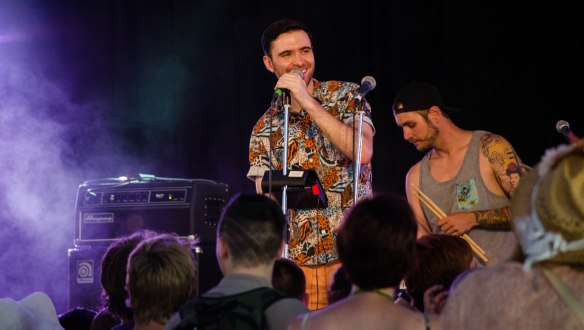 A lot of people slag off Chance Waters. They say he’s ruining Australia hip-hop, pop-diluting the sound and generally putting himself squarely in the sights of hardcore hip-hoppers but after catching his live set at Woodford; I’m a bit of a convert. Even at 4pm on one of the hottest days in Queensland this summer, he had all manner of people aged 6 to 60 up and dancing along to his tunes. He played everything people would already know including his interesting cover of Mumford and Sons ‘Little Lion Man’ and the audience loved it. Plus the man really knows his shit. Never skipped a beat, joined on stage by a full band on his brilliant Dj who opened the set with an awesome scratch routine culminating in a finale using only his nose to work the beats. I have to say though, the man has an obsession with clapping in his songs but there you go. No biggie. 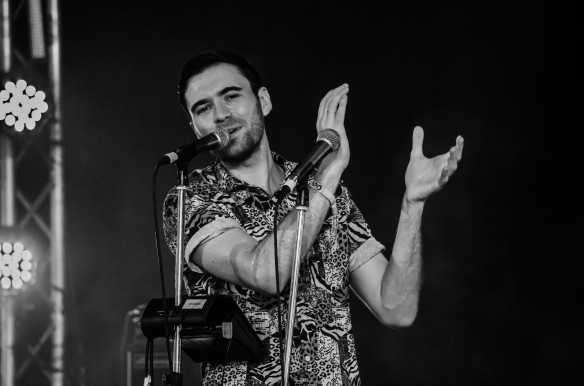 He did however have an uncanny ability to always know where my camera was and as a photographer for live gigs, this is where you really get the goods. Waters didn’t fail me. His stage presence is truly awesome and those who slag him off probably don’t realise he has support of most of the industry underground artists and even went to school with Horrorshow and Spit Syndicate (Fort Street High School).

After a quick bite to eat in between gigs, next up we were graced on stage by three very different and individually esteemed groups for a special forum on keeping Activism in Music hosted by Indigenous Journalist, Jeremy Gaea. In attendance were Aboriginal rock outfit NokturNL, One half of Blue King Brown and the newest recruit to the cause, Canadian artist Kinny Starr. Woodford is one of the only places something like this can really work. Gaea introduced and spoke to each artist individually before allowing them to demonstrate their point through one song each. NokturNL spoke about the rise of the Pauline Hanson movement during their time in the nineties, Blue King Brown discussed the rise of the Free West Papua Movement happening now and their involvement and Kinny Starr spoke about the movement for Indigenous Canadian musicians and the rise of the tar mining and Fracking occurring in Canada’s Northern regions.

Natalie Pa’apa’a finished the forum by announcing she would be holding an acoustic Blue King Brown concert in the Pineapple Bar in 30 minutes off-schedule (another free festival highlight only woodford can produce). We grabbed a drink and headed to the Pineapple Bar. 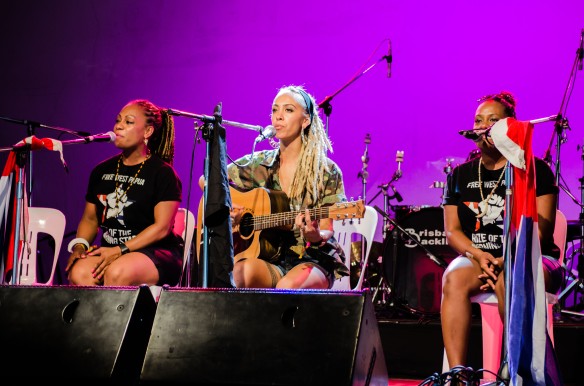 To call this Blue King Brown was a little presumptuous, but alongside Natalie was the two West Papuan sisters Lea and Petra Rumwaropen from the forum and slowly but surely members of Blue King Brown joined in including keyboard aficionado Sam Cope. If you have ever seen a Blue King Brown concert you will know they start hard and fast and end that way; but this stripped back affair was something I wasn’t sure I would enjoy. Boy I was wrong.

Jostling for position in the small venue to watch the three powerful ladies sing BKB tracks was a true highlight of the day. Not to mention the power of ‘Rize Up, Rize Up’ finishing with a colossal crescendo ending with the lightning and thunder crashing outside before the power promptly went off.

A couple of more songs in and we new it was on the way. Rumbling and sky clapping continued before the ultimate and powerful end of the acoustic set was met with a passionate fist in the air and an accompanying roar of thunder. The Pineapple Bar lost its shit right there and then and anyone who was there would have to agree; it was a magical moment in Australian music. 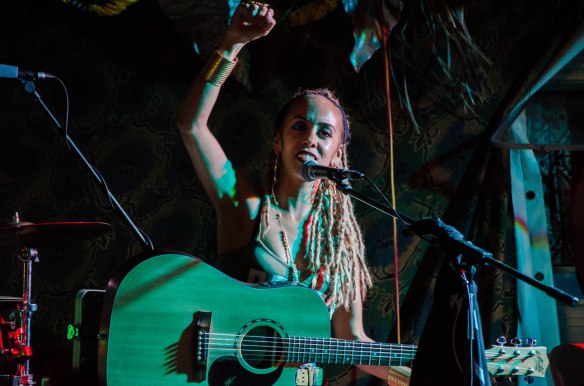 After leaving the Pineapple on our way to the last two performances at the incredible lead stage ‘the Amphi’ before leaving; the power went out again with an almighty clap of lightning. Woodford is not a good place when the lights go out because its in the friggin bush and there’s not a hint of light but the stars. We stopped dead in the path with everyone else waiting for the lights to return and were greeted auspiciously by the smell of damp earth and the coming of the rain. And oh boy did it come.

Within minutes the entire place was a river of mud and screaming punters scrambling for whatever cover they could find. The fully Open air Amphi was deserted in seconds with literally hundreds of people pouring down the hillside from Clare Bowditch’s set. We took refuge under a tent doorway and watched some of the most energetic and enthusiastic Bangara dancers I’ve ever seen who must have been chuffed to have a full house. Eventually the rain cleared and we made our way to see Bowditch but were treated to only a couple of final tracks with the couple of hundred steadfast fans who remained at the stage.

Now we come to the point in the night when everyone knows why they are there. For her only appearance at the festival, and the sole reasons I chose the 29th as our only day to attend Woodford, the ever incredible Beth Orton graced the Amphi stage. For those who have been lucky enough to catch her in concert over the many years she has been in folk music will attest, she is both humble and modest about what she has achieved. Like a little girl her meekness and quiet demeanour hides her incredible history of musical prowess. She still has one of the most beautiful voices in modern music and she has an uncanny ability to perform to twenty or twenty thousand exactly the same. 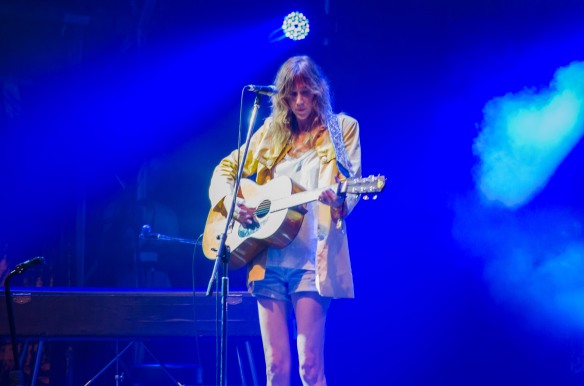 She started out with probably a hundred of so watchers on the hillside but by the end of her set (sadly 10 minutes after we had to leave due to ticketing reasons) she had well in excess of two thousand or more people spread across the Amphi hillside staring in awe of her performance. 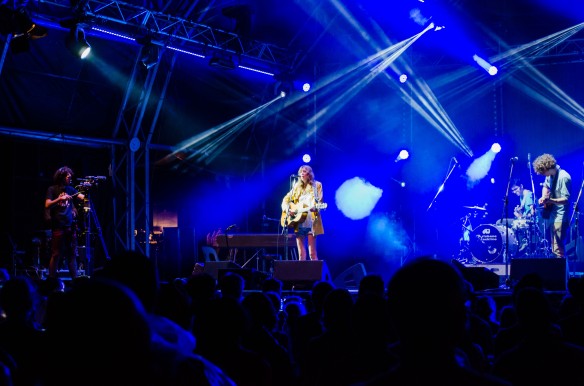 All in all, Woodford Folk Festival is a highlight on the Australia music and arts festival calendar and it never lets you down. I can confidently say, as I do every year; I will be back. Besides the point, I only live 15 minutes down the road so for us its practically in our backyard…