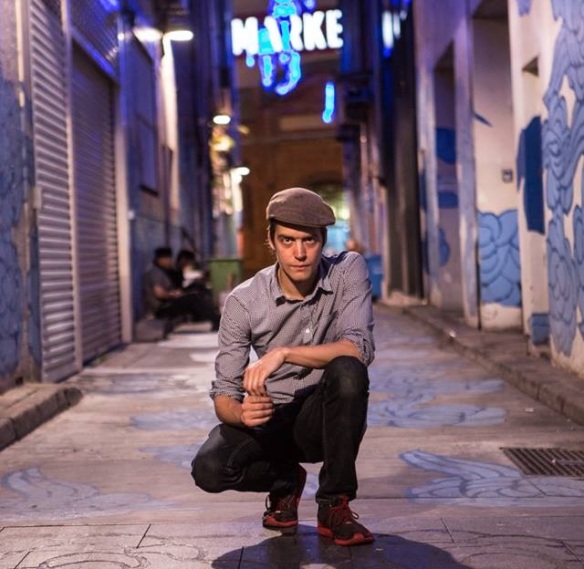 Andrew:  Firstly, where have you been my whole life?! I miss that sound you breed in your music like I miss my diminishing coordination. What has been your catalyst for wanting to be an MC?

Drew: Thank you sir! I kind of became an MC by accident. When I first got into Hip Hop it was the DJ and sampling that got my attention. I used to obsess over videos of Q-Bert, Roc Raida and old DMC tapes – DJ Shadow, that’s what I always wanted to be, a DJ and a producer. As a teenager I couldn’t afford turntables but production software was becoming readily available so I started making beats on Impulse Tracker. At first it was barely even music, just dizzy sound experiments for stoners but eventually it started to form something that resembled Hip Hop. At the time I didn’t know anyone who would rap over my beats so I started writing myself, inspired by Beastie Boys, Redman, KRS ONE and some formative Australian stuff like FLG.  The first few years were pretty rough and terrible but by the time I could actually afford decks the rapping thing had well and truly got its hooks into me. I still lay awake at night dreaming about being DJ Shadow though, maybe someday..

A: I hear heaps of pop culture references in your music including very well informed Star Wars references and some awesome DC comic odes. Is the Supernova mindset a controlling factor in your writing?

D: I’ve always been pretty obsessive I guess but I wouldn’t say the geek thing is a controlling factor in my writing. There have been pop culture references scattered through out all my records but it’s not a high priority. I’m not big on overly conceptual songs, I like to allow the writing to go where it wants. Songs like Selina and Han Solo are very new to me, they were pretty narrow in concept but came so naturally, it felt like it struck a nice balance. Who knew rapping could be fun?!

A: You cite Buck 65 as a major influence and even make mention of your paths crossing with him. He’s not very well known in Australia, but what influence would you say he’s had on your music? What was it like meeting him?

D: Buck 65 had a huge impact on me and the direction I chose with Subsketch. In the early 2000’s I’d been playing around with several groups, feeling pretty bored and dissatisfied with the whole thing but hearing Man Overboard completely rewired my brain and opened me up to the possibilities of what a Hip Hop record could do. Shortly after that I quit my band and started work on what would become the first Subsketch release (The Lost Demo – 2004).

A: Has the Inner SYD hip-hop scene been more kind to you since leaving SA?

D: I think they are about the same in terms of kindness. You get out of it what you put into it. Adelaide was always very supportive from my first shows with Da Klinic and the Certified Wise crew, to the Hoods Initiative and community radio, I would never say SA was unkind to me. The thing was, towards the end I removed myself from the Hip Hop scene; I didn’t feel like there was anyone compatible to play with but in doing so I kind of made it harder for people to find me. So maybe I shot myself in the foot, I don’t know. The good thing about Sydney is there’s a lot of different avenues to play, I have several projects and I’m able to perform at least twice a month and usually to different crowds. They are smaller shows generally, but the regularity keeps you sharp. In Adelaide it can be hard to perform more than once every too months without over-saturation. Since hooking up with Adelaide label Nostalgia Entertainment I’ve been able to maintain a stronger presence in the home town as well and get back pretty regularly for quality shows. Feels like the best of both worlds right now.

A: you’re not a fly by night MC in the underground hip-hop scene but probably not that well known to a lot of Australian hip-hop fans. Where does World’s Worst Rapper fit into your career and how would you explain it to a potential fan?

D: When I was putting World’s Worst Rapper together I was ready to quit. I felt like I was putting the mixtape out as one last hurrah before retreating into my cave to sing folk songs.
It’s still too close to describe it but there was definitely a sense of coming full circle, it felt like I was returning to the Hip Hop world that’d given me my start but with all the accrued knowledge of the last 10+ years. World’s Worst Rapper came together easier than any record I’ve made, everybody who worked on it was a ninja at their craft and I don’t feel too embarrassed to share it with people – which is something I can’t say for most of my releases.

Potential fans should just listen to it and make up there own minds.

A: The one and only Simplex mixed your album and produced on it, how the hell do you get one of the best and revered in the industry to come to the Subsketch party, was there begging and grovelling involved?

D: Haha! Yeah pretty much. I’m not above demeaning myself if it gets results.

Simplex was actually one of my earliest mentors in the Hip Hop world. He used to run MC/Production courses out of Da Klinic in Adelaide. I remember going in to meet him the first day, he heard me rap and pretty much told me there was nothing he could teach me, just keep doing what I’m doing. He ended up showing me some production techniques and schooling me on the reality of making music, he told me if I’m looking to make money from Hip Hop, get out now. Sound advice. Come to think of it he also put me together with a few guys to form my first group (Def Before Dishonour) and then booked us shows and threw me out on stage for the first time too. He’s got a lot to answer for!

We lost contact for almost ten years but while looking for producers for WWR I hit him up out of the blue, it was nice to know he even remembered me let alone that he was keen to work on the mixtape. To conclude, Simplex is a great human being with a tremendous singing voice and if he ever needs to move a dead body I’m there.

A: The Hilltop Hoods Initiative has been going on for quite a while now silently in the background, but has helped highlight some awesome hip-hop artists in the underground. What does the initiative mean to you now you became a winner?

D: I was the recipient of the Hilltop Hoods Grant back in 2006. It was a huge deal to me, funding my first album ‘Cheaper Than Therapy’ and enabling me to tour the country. Opportunities like that don’t come along very often and I think it’s a pretty amazing thing that the Hoods have chosen to do. In 2015 the Initiative will have been running for ten years! That’s huge. I think the effects of it will be felt for a long time through people like K21, Koolta, Jimblah etc. It’s a nice list to be included on.

A: Where do you think the future of Australian hip-hop is going? Have we truly had the Golden Era or are we about to see a new renaissance? Where will it come from?

D:  The future of Australian Hip-Hop? I don’t even know what I’m going to have for dinner or how I’m going to pay rent next week! I’ll get my shit together and get back to you.

A:  Besides yourself, name three Australian hip-hop artists you are keeping a close eye on? (even if its to beat down when they get in the way of the Subsketch Jugganaut)

A: Thanks for taking the time to speak to us here at Audiocracy, we love hearing from artists that keep the independent vibe true to the cause. Hopefully we’ll be hearing more from you in the near future. You are officially now part of the Audiocracy family!