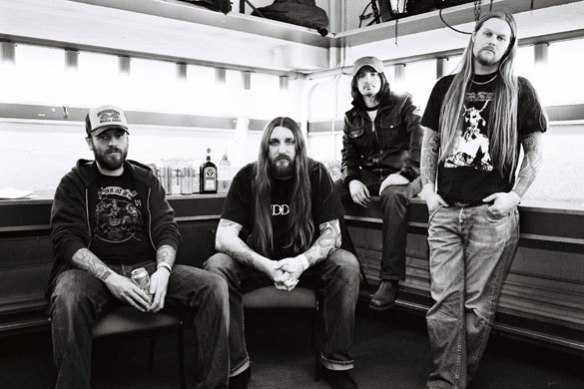 Since their inception in 1995 they have seen many a trend and pretender come and go. The English lads have had their musical style described as “stoner rock, doom rock & good old “heavy metal” over their expansive seven album career.

Humility & integrity from  legends of the heavy rock scene is a rare & wonderful thing.  The band proved to be really down to earth fellas, as exemplified by vocalist Ben Ward’s willingness to answer a few questions exclusively for SSMB.

(Ben Jeffery)- Orange Goblin have achieved remarkable longevity and relative stability in an industry not really renowned for such qualities. Is there any particular factor you can point to that has allowed such sustained success?

(Ben Ward)- Well basically, we’ve just kept going and we’re still having fun doing it. We’re 18 years into our career now and the 4 of us still get on and we still enjoy making new music together and touring the world. We are fortunate that we do this for a living, it’s a dream job really, but that wasn’t always the case so we just stuck to our guns and kept going. We have seen many bands come and go and I think the major factor in that each time is that they were in it for the wrong reasons. If you choose to play music to make millions you had better be pretty special, otherwise forget it. It’s hard to make money in this industry and it will definitely sort the weak from the lifers. We’ve always had the support of decent labels and we established a solid fan base long ago, which has helped us slowly build the band to what is it today.

(BJ)- You have recently returned from a run through Europe, how was the tour and was there any particular highlights or low-lights?

(BW)- There were a lot of highlights on the recent European tour particularly at shows like Waterpop in Holland, Festa de Milhoes in Portugal and Rock Altitude in Switzerland. In fact they were all pretty special in their own way, I think I could count the number of poor shows on one hand and that was only due to poor attendances. We are very grateful to everyone that came out to support us recently, it was overwhelming. We’ve never really toured France a great deal in the past but every show in France was packed this time around and the fans there showed us a lot of love, just as they did in Scandinavia and everywhere else!

No tour is ever without its low-points and this trek had a few. The biggest was losing our guitar player Joe due to an injury to his Achilles Tendon whilst in Italy (he was playing football in the hotel car park!) He was flown home to receive medical treatment but fortunately our guitar tech, Neil Kingsbury, learnt the set and the tour continued without us missing a single show. We also had venues burned down, shows cancelled 2 days before we were due to play, one airline lost our cymbals, another airline lost our merchandise, our van had 2 blow-outs on the Autobahn in Germany and eventually we had to get a new van, driver and trailer! There were hotels that weren’t booked and some promoters were a lot more hospitable than others but all in all it was a good time! We saw it as a test and we got through it so now we feel indestructible!

(BJ)- I caught you on this year’s Soundwave Festival at my hometown of Perth (fucking killer show by the way!) How was the SW experience and how does it compare to other international festivals you have been a part of?

(BW)- Hands down it was the best touring experience of my life and I think we all felt the same way. It is such a massive organisation and I can’t even start to think about the logistics involved to move that festival around Australia and efficiently as they do. It was our first time in Australia ever and to do it as part of Soundwave, alongside so many amazing bands was an honour. Every show was fantastic, both at the festivals and the sideshows we did with Red Fang and Kyuss Lives! We got to make a lot of new friends as well as catching up with old ones too.  We really can’t wait to come back down to Australia and tour again, hopefully including a trip to New Zealand the next time too!

(BJ)- I recently saw that you were unfortunately subjected to the nastier side of social media with some out of line comments on your Facebook page. This would be just one example of how the industry landscape has changed since you began. How do you view the new “social media age” – is it a necessary evil, a useful tool or something in between ?

(BW)- It’s a fantastic tool for bands to promote themselves as you have access to millions of people at the push of a button. It never used to be like that when we started out and we had to build a reputation by finding pen pals, tape trading and actually getting out and playing shows and well as handing out flyers at other peoples shows. It’s fantastic for new bands and I don’t blame anyone who embraces it fully. Unfortunately it also gives people chance to say what they want to whoever they want, mainly stuff they would never have the guts to say to someone’s face but as a band you have to be prepared for that. We all have a pretty thick skin but the incident you refer too crossed the line and brought band members kids into it so we had it deleted. People can say what they want about any of the four of us, we couldn’t care less.

(BJ)- Is there any particular act that has really caught your attention and/or impressed you recently ?

(BW)- There are loads of great bands around at the moment and refreshingly all doing their own thing. Off the top of my head I would highly recommend ASG, The Earls of Mars, Conan, Scorpion Child, Grifter, Desert Storm, Undersmile, Kadavar, Windhand, Lord Dying, Serpent Venom…I could go on for ages!!

(BJ)- My final and most off-kilter question ( from a strange, typically morbid topic my mates and I discuss over a few bevies).
– If you could choose how you were going to die, what would you choose ?

(BW)- Yeah, that’s an odd one! Despite my love of horror films and gore I think when it’s my time I’d just like to go peacefully in my sleep once I’ve seen my children grown up. Sorry it’s a pretty boring answer!