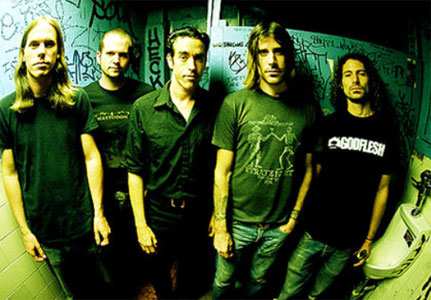 Californian outfit Red Sparowes have been purveyors of sprawling, expansive instrumental post-rock for the best part of a decade. Comprised of an eclectic group of musicians who have individually achieved plenty, the group have converged into a focused unit and have produced a catalogue of brilliant  soundscapes and absolutely affecting music.
Drummer Dave Clifford is a man with his own impressive history which includes contributing his considerable talents to not only Red Sparowes but also post-hardcore heroes The VSS and Pleasure Forever.
Thanks to the miracle of the internet, he and I sat down over virtual lattes and had a chat.

Ben: Red Sparowes has been a collaboration of artists with extremely impressive resumes and relatively diverse musical backgrounds; can you tell us how the group initially came to be?

Dave: The band started in 2003 basically after Cliff Meyer had moved to L.A. from Boston with the rest of Isis. He knew Josh Graham from Neurosis and Greg Burns from his previous bands on the east coast (Halifax Pier, Jasta 13). Along with recent L.A. transplants, bassist Jeff Caxide (Isis) and drummer Dana Berkowitz, the early lineup took shape for the first demos and recording the At The Soundless Dawn album. The lineup shifted shortly after the first album’s recording, with Dana and Jeff relocating to the east. I joined the band in late 2004 and Andy Arahood joined a few months after. The lineup remained essentially the same from that point on, with Emma Ruth Rundle (The Nocturnes, Marriages) replacing Josh after he left the band in 2008. Our good friend and longtime tour companion — from touring with his band Made Out of Babies, to his filling in for Cliff and later for Josh on tour — Brendan Tobin played on the Aphorisms EP remains an honorary member.

B: I don’t tend to ask this but I cannot fight the curiosity – can you please explain the band name?

D: The band name originated from a T.S. Elliot poem that mentions sparrows in the gutters. The band’s original name was just Sparrows, but it turned out that there was already a band with the same name. So, the eventual decision was made to use the old English spelling and add “Red” to the name as a further distinction.

B: Which of the following would you say best describes the band’s creative process and why?  – Socialism, democracy, dictatorship or anarchy?

D: Democracy. It’s always been a longer and more complicated process to write songs with every member having an equal say in not only their own parts, but each other’s parts as well. But, we think the end result has been beneficial involving everyone’s collective input and often vastly different ideas. I highly doubt that a band could have a sound like Red Sparowes if it were solely the vision of one person.

B:  The musical landscape has changed dramatically from a business and artistic point of view over the last couple of decades. The impact of the internet has been profound in many ways, do you feel it has provided artists more control or less control?

D: That is a pretty big question and I could go on and on about the issues facing the music industry. But, I suppose the succinct answer is that yes, it has afforded artists more control — but much of what stood before remains the same. Yes, it has put access in everyone’s hands, but the signal-to-noise ratio of what actually gets heard/seen has increased so much that — to paraphrase a movie — just because you build it, doesn’t necessarily mean that they will come. Internet access has run indie record labels out of business, not the major labels. The majors just don’t take as many chances as they used to, but they’re doing fine with their mega-stars signed to vulture 360 deals. But, somewhat unfortunately, without indie labels, indie artists have to be able to raise their own capital to fund recording and releasing their albums. That’s neither good nor bad, really, but it does create a greater challenge.

B: Have you had any particularly impactful non-musical influences on your life and/or music, such as artists’ or authors’ ethos?

D: Absolutely, there are many. Philosophy, science, film… many things contribute to the music that I make. One particular contemporary author, Howard Bloom has really influenced me for his stunning way of encompassing big picture ideas while discussing in very tiny minutia our attempts at understanding human behavior and the cosmos. His books The Lucifer Principle, The Genius In The Beast, Global Brain and The God Problem are all highly recommended. Beyond that, a cross-section of existential philosophy, surrealism, science and comedy seem to be my biggest creative influences.

B: What is the prospect of us having some new material from Red Sparowes looking like?

D: At the moment the band is on hiatus with no clear plans for new music in the immediate future. Everything remains open-ended, so we’re not quite sure if or when some new material will be released. We all wanted whatever we might do next to be really special and not rushed or done with any concern for sticking to a traditional band schedule. It seemed to make sense to just take a break and see what happens.

B: My final question is a somewhat unusual one I like to finish with. – If you could choose how were die, what would you choose?

D: Whew, that’s a tough one. I suppose the unexciting answer would be dying in my sleep. That would be painless and simple. Otherwise, I’d imagine dying while onstage playing a show would be the most exciting way to go. I would just hope it was a graceful exit.