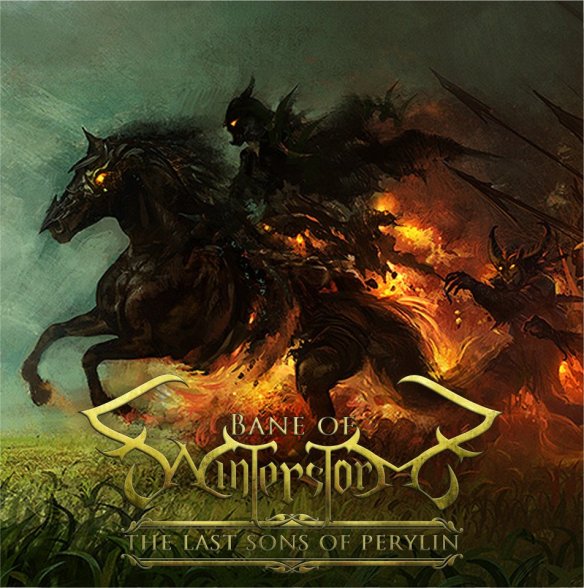 If you’ve seen the album artwork, read the title and managed to make it to this point in the review…. er, which is the beginning, you’ll probably have a fair idea what we’re dealing with here.

Power metal.  Symphonic power metal at that.  In fact,  Melbourne outfit Bane Of Winterstorm make no bones about the musical space they occupy which is actually quite refreshing.  Too many bands are guilty of genre-dodging these days, erroneously and conceitedly claiming to be a completely new style unto themselves.  Well that ain’t the case with BOW.  Their Facebook page announces proudly that they’re symphonic power metal and… well if a job’s worth doing it’s worth doing properly.  They’ve taken the style to the nth degree… they’re symphonically-orchestral superpower metal!  Fantasy themed lyrics dealing with mystical journeys, dragons, vanquished adversaries and suchlike, 15 minute songs with increasingly ponderous titles, crotch constricting vocal performances, finger destroying guitar solos and epic orchestrations make this release either utterly inspirational or your worst nightmare… depending on your tastes.

But before I get too ahead of myself, a little about the band.  BOW is essentially the brainchild of Anthony J. Finch who composes all the lyrics and music… and plays almost all of the instruments on this debut album.  The band is complete as a live outfit but most of the instrumental duties here were handled by Finch himself… actually the list of credits on the album sleeve reads like no other I’ve ever seen…

This is it in a nutshell:  Anthony J. Finch- Almost everything including vocals… plus eight more vocalists.  Yep that’s right.  EIGHT other lead vocalists!  Well I never…

The word that keeps springing to mind while listening to The Last Sons Of Perlyn is “epic”.  It’s an oft overused term, but it’s the perfect adjective to describe the music.  Relentless thrashing rhythms overlayed with plenty of choral and orchestral synths form the bulk of the record, but they’re interspersed with atmospheric sound-scapes, both chilling (“The Magic Of Mithren’s Ring”) and ethereal (the closing title cut).  Melodic death and doom laden traditional metal intertwine themselves around the compositions. These touches combine with some purely orchestral phrases, (“The Ancient Ritual of Räkth”) to provide a menacing sonic phantasm not always found in power metal.  Certain bands can sound unintentionally twee and often their hand-over-heart sincerity comes across as comical… definitely not the case here!

The dizzying array of lead vocalists do a fine job for the most part, ranging from gruff shouting to clear and soaring falsettos to multi voiced harmonies.  There are a couple of instances when they’re a little flat (“The Black Wind of Morthion”) but that’s really nit-picking and the inclusion of a female vocalist (Jennifer Borg) adds some subtlety and variation to the moods of the songs.  Far from causing confusion, the unprecedented number of lead singers contributes to the feeling of unity and “we are one” kinda vibe, particularly during the title track when the lyric “…so we march on as one, stand proud and strong…” is given extra poignancy… or cheesiness?  No it’s poignancy dammit!

When applied, the six string heroics are excellent; quick enough to please the most discerning shredder, yet also tasteful and the tone is rounded and smooth rather than harsh or cutting.
Probably the biggest complaint I have is with the programmed drum sounds, although I’m sure this method was undertaken due to necessity rather than preference (and there are plenty of other bands doing it).  The double kicks and toms are a little too relentless with little variation.  A human drummer would have added extra dynamic shifts and compositional input.  As talented as Finch is, no man is an island and I would love to have heard this album if it were recorded by a full band.  Again, a very minor complaint.

The lengthiness of the tracks may put those who aren’t on first-name-terms with power metal off, but I can tell you that their sprawling nature actually compliments the odyssean themes contained within. The compositions, like their subject matter, are representative of fantastical, monumental sojourns and one is immediately spirited away by the music.

Metal of the power variety ain’t exactly my goblet of mead, so for a release to make this kind of impression is pretty remarkable.  For once, a band’s biographical hyperbole is  fairly accurate, they are taking symphonic metal to new & menacing heights and this debut is hella impressive.  In fact, to sum it up in one phrase…  it’s world class.  ‘Nuff said.

‘The Last Sons of Perylin’ out now through Itunes and CD baby
Official band page: http://baneofwinterstorm.com/

1 thought on “Bane Of Winterstorm- The War of Shadows I: The Last Sons of Perylin”