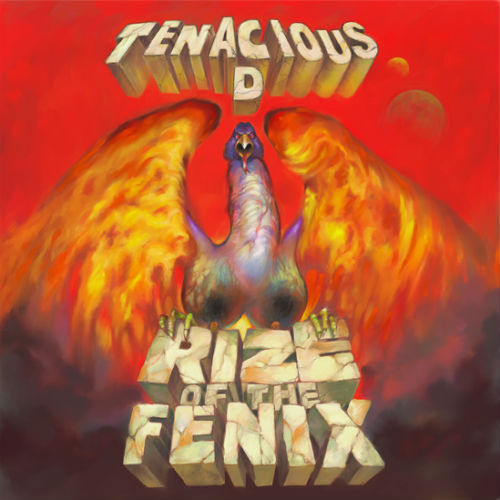 The third album from the rock/comedy duo of Jack Black and Kyle Gass has been unleashed on the unsuspecting rock masses.  So, how does it stack up against the band’s previous works and the rock music status quo?

I was really looking forward to this album, having been a huge fan of the film ‘The Pick of Destiny’ and it’s soundtrack.  Black and Gass’ faux-sincerity has been a very welcome antithesis to the oh-so-serious rock and metal attitudes of the 21st century and only Steel Panther fly the same flag currently.   Comedy rock/metal has been attempted in the past with varying results.  Scatterbrain were excellent, Lawnmower Deth and Acid Reign were adequate and GWAR were pretty terrible although they were probably the first to ever ply comedy metal as their trade.

Tenacious D are easily the most popular act of this genre (if it can so be called) and they have supported the Foo Fighters and consistently sell out arena shows worldwide.  Championed by Dave Grohl, Russell Brand and Kanye West, the band have undoubtedly made an indelible mark on popular music.

So what of Rize of the Fenix?  Well, musically it is pretty damn good, continuing the D’s sound of well constructed classical/Latin acoustic guitar  noodling from Gass combined with hard rockin’ riff fests featuring the over the top vocals of  Black and the powerhouse drumming of Dave Grohl.  ‘Deth Starr’ and ‘Rock is Dead’ are particularly energetic rockers and had me nodding along with enthusiastic approval.  Black is actually a very good singer despite him taking the piss out of himself consistently and employing crotch crushing falsettos! Much of the material has an epic feel to it and it almost sounds like a prog/concept album at times, with some comedic spoken word skits thrown in for good (?) measure.

As much as it pains me to say it, there is a big problem with this album.  It’s not funny.  After repeated listens, I couldn’t even manage a dry smile.  Some of the lyrical themes border on the very serious (although they are satirical) dealing with unrequited love, the demise of the human race and lost friendships, and the ‘D at times seem to have almost turned into the very rock dinosaurs they parody.   This album works much better as a rock album than a comedy album and the ill conceived spoken word “comedy” sketches are cringe-worthy.  I don’t know what else to say about that.  I could list some of the lyrics, but without the context of the songs, they wouldn’t make much sense.  Gratuitous swearing and dick/ass references abound (especially on ‘They Fucked our Asses’!) and it’s just inevitably worn thin after ten years and three albums.  It’s not a bad album and I’m sure many will accuse me of having no sense of humour regarding the lyrics but it is what it is, and it aint what it aint.  And it aint funny. (Well not very).  I did laugh during the track ’39’ when Black croons “I’ll fuckin’ tear you oesophageus out!” with tender earnestness!

Despite the comedic shortcomings, Rize of the Fenix is worth a listen for the song writing and instrumental performances as it rocks along pretty well for the most part, and as a rock album is quite good, but as a comedy album, well it falls far too short of the benchmark the band has previously set.

1 thought on “Tenacious D- Rize Of The Fenix”