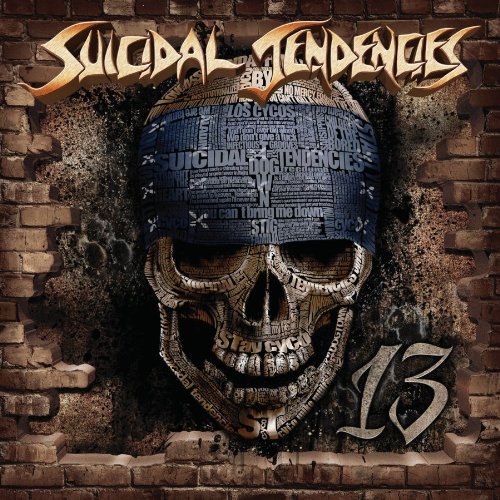 What is it with bands obsessing over the number thirteen as an album title?  First there was Megadeth’s mediocre effort of a couple of years ago then Black Sabbath’s recent return to form and now Suicidal Tendencies’ newie!  Yes we know what year it is thank you!

ST may be able to claim ownership of the number slightly more so than Sabbath and by a whisker over Megadeth who’s album shares a couple of these points;  firstly the number appeared on ST’s merchandise over a decade ago, secondly this is their thirteenth full length album  and thirdly there are 13 songs on it.  Also did you know it’s 2013?

The very first thing that confronts you upon tentatively prodding the play button on your CD player is the barrage of  Mike Muir pushing the decidedly tired Suicidal shtick at you.  It’s all  cyco this and ST that, Sucidal’s back mofo’s etc…but more on that later.

Being the band’s first release in over a decade, ST fans were champing at the bit to cop some new Suicidal tunage.  Though the current line-up bears little to no resemblance to their “classic” period, or even the personnel who graced their very strong efforts of ’99-’00, the band’s mainstay & front man Mike Muir has consistently surrounded himself with exceptional musicians.  However it’s been almost thirty years since Mike first screamed his maniacal rants about Pepsi and Institutionalization at us, so what shape are the band in, in the seemingly eponymous year that is 2013?

They’re…doing ok…I guess.  From a songwriting standpoint the band seem to have fallen off the pace a little.  Many of the guitar riffs are fairly trite and merely reproduce what the band has done in the past.  Having said that, they’re executed with precision…as are all the instrumental parts.

Ok so the song arrangements aren’t exactly cutting edge…that’s fine, it’s ST.  As long as they do what they do well and with enthusiasm who’s to complain?

Well…the riffing isn’t the only thing that’s a little hackneyed.  Muir’s ubiquitous rants which primarily involve the repetition of Suicidal clichés  “cyco style”, “ST”, “Suicidal”, “Smash it”, “funk it up” “slammin”  etc are pretty disappointing.  At the height of his lyrical prowess, Muir was as charismatic a lyricist as you were likely to find.  Almost simultaneously he was a lunatic, a political commentator, a self help book and a purveyor of utterly inspirational anthems.   On 13 he’s rather like a parody of himself. He’s dropped all his cutting socio-political commentary and while there are mentions of personal struggles, it’s almost like the aforementioned clichés have become  brand identifiers for Suicidal Tendencies; they feel they cannot exist without them.  Well this writer has  been hearing them for decades and he’s sick of it.  Suicidal is a band we expect to be challenged by and 13 is as lyrically unchallenging as even the weakest material in the ST catalogue.

Now then…here’s the redeemer.  The instrumental performances are very, very good.  Particularly impressive is the drumming of Eric Moore.  He almost carries the weaker tracks all on his own with his power and creativity.  Someone buy this guy a drink, he’s almost single-handedly saved the album from being a complete wet blanket!  Also noteworthy is the funky slap bass work of Steve Brunner and the lead guitar efforts of Dean Pleasants.  Although the latter has been around for a while now, he’s shown that (unlike Muir) he’s improved.  Some of his lead work is superbly melodic and at times he almost….almost succeeds in bringing some semblance of the band’s glory days to this album.

Despite the record containing some fairly weak material, there are a couple of gems here.  “God Only Knows Who I Am” is the album’s best track by a mile.  It starts off as a bit of a slow burner, building and building before crashing into an epically catchy chorus.   In addition to being the most infectious (no pun intended) track, it best articulates the talents of Moore and Pleasants.   The latter at times sounds as if he’s channelling a more focussed, hardcore version of Dave Navarro, while Moore’s drumming is simply insane!  Frantic scatter-bomb fills and flailing cymbal hits pepper the track, especially during its climactic finale!  Awesome.

While not quite as spectacular, the closing track “This World” is worth a mention simply because it’s a perfect way to end the album; on a high note with a memorable melodic progression and an energy that reaffirms your belief in the merits of the band.

Despite being the sole original member, driving force, lyricist and focal point, Muir is almost the weak link on 13.  He’s outshone on all counts by his assembled musicians and seems to have little to really offer particularly from a lyrical standpoint.  Paradoxically though, it wouldn’t be ST without him.  He’s utterly indispensable to the group and despite this not being their best work, the band remain a must-see live act with a relentless touring schedule.  The fact that they’ve consistently played sold out shows for the last decade despite having no new material whatsoever is testament to their longevity and undeniable appeal.

13 may well take it’s deserved place in the lower echelon of the ST catalogue, but the band is an institution and hopefully they’re just warming up after a 13 year break between albums.  Bring on the next one…quickly!