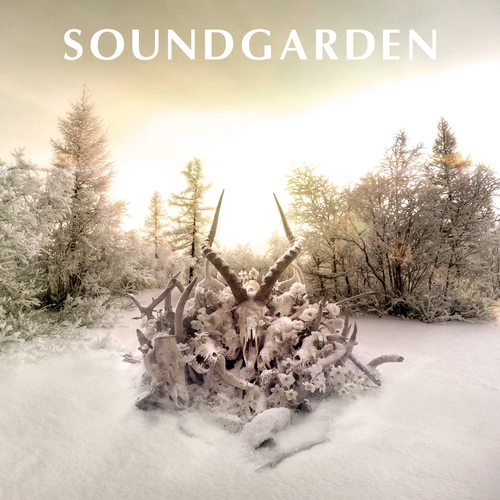 Sixteen years.  That’s how long it’s been since Seattle heavyweights Soundgarden have released a studio album!  Down on the Upside was the band’s swansong, or so it seemed at the time.  No one could have guessed we’d see another album from them, much less with the classic lineup!  Can a band who’ve been apart for so long produce an album that’s fresh and exciting and still maintain their signature sound?  Well…

The record kicks off  strongly with the aptly titled “Been Away For Too Long” and straight away you know it’s Soundgarden, particularly when Chris Cornell’s vocals kick in, as he displays his immediately identifiable wail for all to hear.  His singing appears to be as strong as ever, and the band’s recent touring no doubt helped immeasurably to get his vocal chords back in shape.  The tour also seems to have given the whole band a chance to refine their musical chops and has helped them to work together cohesively as a unit.

This album sounds as if it was recorded smack bang between the band’s most successful works Superunknown and Down on the Upside.  Everything’s there;  Kim Thayil’s heavy riffing/energetic soloing, Cornell’s powerful, effusive voice, and a rhythm section (Matt Cameron and Ben Shepherd on drums and bass respectively) that pumps and pulses with creativity, yet provides a solid base for the songs to spring from.

Apart from the instrumental/vocal performances, the thing that really grabs you about this album is the songwriting.  Certainly it’s reminiscent of the band in their heyday as I mentioned, but rather than try and write the next “Black Hole Sun”, “Jesus Christ Pose” or any other teen anthem, they’ve added a different dimension:  a slightly more complex approach.  There are many musical phrases which feature strange meters and offbeat polyrhythms.  Surprising the listener are musical “fills” or rather: short, melodic pieces of music that are not present anywhere else in the song, that really tie the verses, choruses, bridges, and other musical phrases together.  There are some very clever, and at times, almost astounding flurries of musicianship.

It’s this touch that prevents the album from sounding like a token throwback or cash-grab.  In fact, it completely throws Billy Corgan’s comment of “Nostalgia act…” right back in his beachball face!

Of course this record comes right at the peak of the “90s revival”, so it’s been well timed, but any negative connotations derived from this term are surely reserved for pop acts like the Vengaboys (ugh) et al.  There have been some extremely strong releases from grunge/’90s acts this year…even ol’ beachball Billy himself managed to silence the critics with the new Smashing Pumpkins record.

Any fan of Soundgarden will love this album.  It sounds like a combination of the two albums I mentioned previously, only with an added dimension that is challenging, but not confusing.  Musicians and non-musicians alike will eat this album up and only the most ardent of grunge-haters could possibly dislike it.

There’s no filler.  All the tracks are catchy, interesting and enjoyable, and therein lies the album’s only downside, if it can so be called.   There’s no song present that is a real standout.  That is to say, no hook laden sing-along that could be a world beating single.  As I alluded to earlier, it seems the band have deliberately avoided attempting such a feat, and it actually makes the album more appealing as a singular entity.  So stick that one in the “eye of the beholder” file I guess…

Righto then…standout tracks.  “By Crooked Steps” is a rhythmically stuttering (in a good way) number that features some fantastic vocals from Cornell.  He’s certainly no slouch on “A Thousand Days Before” either, this track featuring perhaps his best, soaring vocal performance on the record.  “Blood on the Valley Floor” is a sludgy, detuned, yet happy sounding slower song that really harkens back to the band’s glory days, and “Bones of Birds” has some brilliant warbling bass from Ben Shepherd, lovely octave guitar lines from Thayil and more great vocals and harmonies from Cornell.  And that’s not all…”Black Saturday” starts out sounding like Led Zeppelin in their quieter moments but bursts into a sort of angular thrash-soul, complete with brass section!  Perhaps the album’s best track (just pipping “By Crooked Steps” and “A Thousand Days Before”)  is “Worse Dreams”. A spooky, smouldering slice of weirdness that contains the album’s best riff.  The guitar and bass combine to produce a circulating, spiralling sound that Tony Iommi himself would be proud of.   It’s a truly haunting piece of music that cascades into a really poppy chorus, which is a little surprising, but it works really well, especially when said chorus smashes into a cacophonous racket of competing instrumentation, with only Cornell’s blood-curdling scream and Thayil’s screeching solo being distinguishable from the miasma of distortion.  This part lasts all of fifteen seconds and before you know it you’re back into “safe” territory again.  Fantastic.

All in all, this is a great album.  Among the best the band has ever produced in fact.  All the instrumental performances are exemplary and the song structures are bold, engaging and quirky.  Cornell’s voice is as good as ever of course, and, if this album is condemned as merely the work of a “nostalgia” act, then give me nostalgia or give me death!