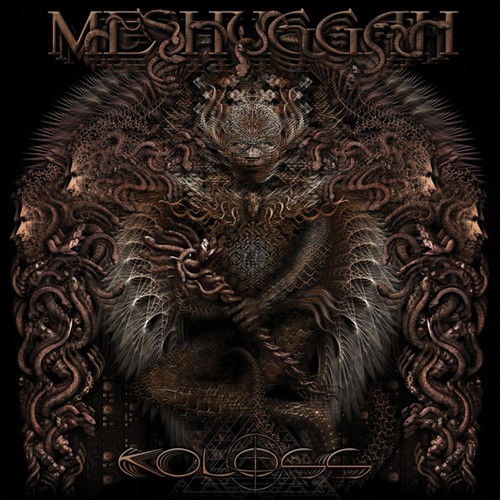 After seeing this band live at the Soundwave festival, I was really looking forward to hearing this album and breaking it down into bite size pieces for your enjoyment.  Fans of the band will certainly know what to expect.  Brutal heaviness, mind-blowingly complex rhythmic shifts and all round insanity.

Within the first 10 seconds of the first track ‘I Am Colossus’, the expectations are certainly confirmed, and I gain the impression that this will be a challenging album to critique and will definitely be challenging for some folks to listen to.

Formed in 1987 in Umea, Sweden, Meshuggah (Yiddish for ‘insane’) have steadily built a dedicated following of fans, and are undoubtedly one of the most important and influential metal bands of any era, giving rise to the ‘Djent’ sub-genre and inspiring countless up and coming bands with their polyrythmic intensity.

Koloss is their first release since 2008’s ‘obZen’, and is the 4th album produced and engineered by the band themselves.  There is more to these guys than just musical proficiency and it’s great to see bands doing this kind of thing, and taking complete creative control of their project.

Musically, Koloss follows on from their previous albums.  Super heavy guitar tones, algebraically complex rhythmic patterns, crazy-lower-than-low string bends, screamed vocals and absolutely perfect instrumental execution.  The drumming in particular is something to behold.  Drummer Tomas Haake is a phenomenon, never missing a beat, and one can only marvel at the sheer mathematics that must be going on inside his head.  Of course this is true of the rest of the band also, as they seem to keep time all on their own, interdependently of one another.  There is a phrase in the track ‘Marrow” which is just guitar and bass.  No drums or vocals, and its as complex in its composition as any other track on the album.  Lead guitarist Frederik Thordendal also throws around some great solos which have been less prevalent on earlier albums and these break up the song structures nicely and give a melodic slant to the tracks.  Melody is not a word used in conjunction with Meshuggah very often as the guitars and bass are played in quite a percussive fashion, and Vocalist Jens Kidman really only uses one style of singing/screaming.

This album is possibly less intense than earlier works with some atmospheric keyboard sounds utilized and some riffs almost bordering on groovy with more melodic content.  I actually like this touch as it becomes difficult to listen to some of their earlier albums in their entirety.  Not that I don’t like them, it’s just hard on your ears to have no respite except for the silence between tracks.

The production is hard to fault, and the band has done a great job doing it themselves.  I don’t think they ever need a producer again!

Standout tracks are ‘The Hurt That finds You First’ which is bordering on hardcore punk, in places and is a real uptempo thrasher, totally unlike the heavy grind the band has become synonymous with.  ‘Marrow’ has a superbly heavy / groovy bounce, as does ‘Demiurge’.  ‘The Demon’s Name Is Surveillance’ possesses some brilliant double kick work and the chilling riff is reminiscent of Sepultura’s ‘Arise’

My favorite track would have to be ‘Swarm’ which features deliciously heavy riff-o-rama and an almost terrifying instrumental ascent that leaves you shivering.

A special mention must also go to the final track ‘The Last Vigil’ which is a soft instrumental, totally bereft of drums and is really quite haunting.

There is still quite enough brutality and mind-bending complexity on offer here to satisfy hardcore fans, indeed, casual observers of metal (except, perhaps aficionados of free-jazz/noise) and fans of mainstream rock  will struggle with this album as they would with the entire Meshuggah catalogue.  But, I, for one find the slightly more melodic direction most enjoyable and believe the band has produced a work that considerably adds to their catalogue as a whole, and it additionally proves they still have a great deal of creative vision and drive, and hints at the notion that this unique band are far from finished.