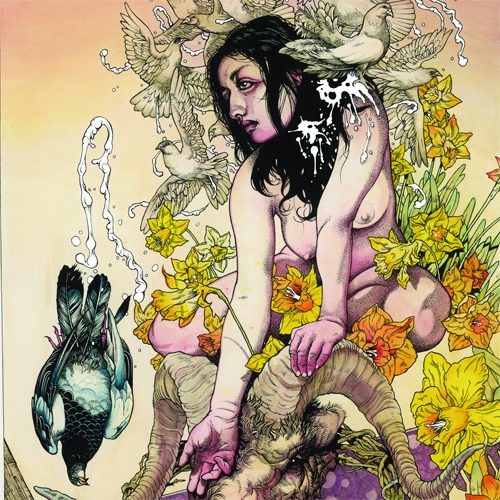 Bursting onto the international metal scene in 2010 with their eponymous debut, Norwegian 6 piece Kvelertak (stranglehold in English) caused major waves in the hard rock/metal community thanks to their fresh approach of combining black metal, hard rock and punk into an infectious and impressive amalgam.  The strength of their debut was such that they’ve toured all over the world winning many fans along the way…in spite of every syllable on both their albums being sung in Norwegian!

Yes, their debut was mightily impressive no doubt.  So, have they kept up the good work?

Well, the good news is, if you liked their first effort, you’ll like Meir.  It follows on stylistically from their debut, combining flurries of black metal with some epic stomp-along stadium rock moments.  Throw in some punk inertia and a distinctly Scandinavian solemnity and you’ve got….well… their debut MkII really.

Seeing as how the lyrics are indecipherable due to the language barrier (being throat-shreddingly shrieked, they’d probably be indecipherably anyway), it’s almost an instrumental effort.  If Scandinavian metal stereotypes are to be believed they’re probably just ranting about burning churches, Norse mythology, corpse paint, and murdering each other anyway…

So, without the distraction of lyrics to cloud our analytical judgement, let’s focus on the music.  There is an abundance of impressive guitar riffery.  Having three guitarists means that some fairly interesting harmonies can be achieved and the band certainly manage to bust out some totally epic sounding grooves.

On their debut there was a definite influence from fellow Norwegians Turbonegro, and this has lessened slightly on Meir.  It’s still there in places, but they’ve focussed slightly more on acoustic interludes, furious black metal and grandiose rock.  Not prog mind you, but the kind of fist pumping stadium heroics as dished out by AC/DC, Boston and Journey.  Don’t be put off by that.  The band demonstrated with their debut that they’re more than capable of combining the styles with great effectiveness.

They’ve certainly created another very impressive work in Meir, but I have one problem with this album: it barely progresses anywhere from its predecessor.  There’s slightly less punk and they’ve added just a hint of Skynyrd-esque southern rawk, but really, this effort is interchangeable with their first.  There’s a brief flurry of Indian sounding Phrygian guitar work in “Snilepisk” but besides that, it’s more of the same.

Don’t get me wrong, this is a good album.  A very good album in fact.  Its catchy rock’n’roll, pounding thrash-assault drumming and three-pronged guitar attack combine to create plenty of triumphant and cathartic musical crescendos…  But so did their debut.

Perhaps I’m being too harsh on them.  They’ve found their style (well…combination of styles) and they appear to be sticking with them for the moment.  That’s all well and good, but I believe they have the ability and vision to propel them almost beyond any metal band on the planet in terms of diversity….and with Meir, they haven’t quite reached their potential.  There’s no way I can give this album a bad rating, but it left me feeling slightly let down.