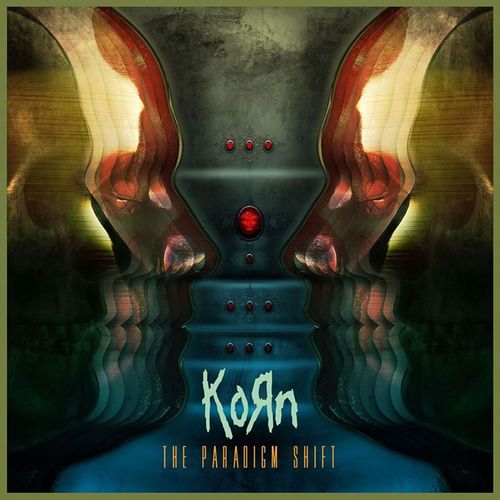 Nu metal.  Time has made a generic misnomer of  the term.  It’s no longer “nu”, and in many pundits’ eyes & ears, isn’t even metal.  Whatever your opinion of the bands lumped into that category, general consensus is that Korn were among the pioneers and just about the cream of the crop.  This is either a compliment or means they’re guilty of the greatest crime in the history of recorded sound depending on your musical bent .

2013 marks 20 years since the band released their first demo, so it’s a  bit of a milestone year for them.   However, in the current musical climate of an incalculable number of bands spawning an inconceivable number of heavy sub-genres, a group widely perceived as irrelevant has-beens or never-weres releasing an album entitled ‘Paradigm Shift’, is either a really brave, or really fucking stupid move.  Which is it?  Read on, dear reader….

The album wastes no time with intros, bursting straight into the stomping rhythmic pattern of “Prey For Me” and… well, it’s not a bad start.  The band is instantly recognizable with Fieldy’s rubbery bass lines providing a foundation for the detuned distortion of Head and Munky’s riffs.

The first thing that strikes you about ‘Paradigm Shift’ is the production.  Compared to their early efforts (which haven’t aged that well, the bass guitar tone in particular is horrid) the sound is thick and chunky.   Producer Don Gilmore has done well to flesh out the overall feel of the record and has modernized it enough to at least give it a chance of positive commercial reception.

Like many heavy bands these days, Korn has worked some electronic and dub-steppy sounds into the grooves, but they haven’t overdone it and they add atmosphere and a kind of sci-fi intrigue to the whole thing.  What they (wisely) haven’t done is tried to fit into the prog-core mould by over-playing or trying to be super technical.  For a start they don’t have the chops, and more importantly, it would have been seen as shameless bandwagon jumping by a slavering music media looking for any excuse to kick the shit out of an easy target.
No.  Korn is, and always has been about the stomp.  About the groove.  About the bounce.  And this record has you virtually jumping from start to finish.

So the instrumental and production side of things are pretty decent then? Yep.  But what about Jonathan Davis’ vocals?  Surely he’s lost his voice after two decades and is embarrassingly trying to rap-scream about getting the fuck out his face and dreaming about sex all day?  Nope.  Not only are the lyrics far more thoughtful & intelligent than in days past, but he really belts out some clean & clear vocal melodies and clever harmonies.  There’s the odd scream here and there, but they sound pretty forced and if his voice has a deficiency after all this time it’s in this area.  Thankfully he’s not in denial or flogging a dead horse and they’re far less prevalent than on previous albums.

In addition to the new electronic sounds, they’ve added some other elements to their familiar style.  There’s the presence of some Ministry/NIN industrial parts, particularly in “Never Never”, and seemingly flying out of nowhere is some fiendishly sneaky black metal riffing in the otherwise Fear Factory-esque “Mass Hysteria”!  Also making an appearance is some Gary Numan-like goth-rock in “Paranoid and Aroused”.

While we’re on the subject of individual tracks, here are the true standouts:

“Lullaby For A Sadist” is a ballad of sorts and features acoustic guitars, a chilling, doom-laden middle 8 section and an infectious & tear jerking chorus of “You wanted to play… the coldness follows… this isn’t a game… you wanted to play… but I already won”
“Punishment Time” is probably the heaviest song on the disc, it starts out like it’s gonna be a techno track but quickly morphs into a brutal dissonance with some quirky, offbeat syncopations and a really weird one-off 6/8 kick drum figure.  That’s what makes this track really interesting, there are all sorts of little elements that happen only once in the song.
As is my wont, I always like to pick a winner of all the tracks offered by any given album and the clear victor from this record is “Spike in my Veins”.  Speaker destroying bass drops, a floating, almost serene sense of melody,  fascinating vocal effects and… one hell of a gargantuan riff!

‘The Paradigm Shift’ surprised the hell out of me.  I was resigned to my fate of using it as a literary punching bag, but it’s got groove, hooks, melody, brutality and originality in equal measures.
Forget any misconceptions you may have about how awful this band is/was, this album is excellent, and amazingly from this jaded and sarcastic reviewer, it gets an…