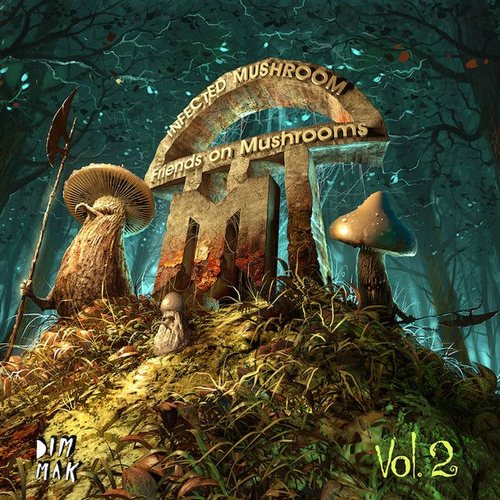 “What?!”, I hear you say, “I never heard about a new Infected Mushroom album coming out!” And after the release of ‘Army Of Mushrooms’ last year you could be forgiven for missing these two linked EPs which have snuck through with little or no fanfare. They are, of course, only 4-track EPs but together they comprise some of the best offerings/remixes the group have produced in years. Experimental, uncompromising and oh so shroomy ‘Friends On Mushrooms’ is Erez and Duvdev at their most obscure.

With artist as diverse as Kelsey Karter, Savant, Pegboard Nerds, Hope 6 and Astrix sharing the duties, these two sets of four are a strange but welcome collections of collaborations. This is largely due to the new home the guys have made at Dim Mak Records, which is rapidly becoming the place to release edgy and underground electronic music in the world today. Its given Infected the chance to collaborate with a larger group of artists not primarily narrowed to the genre of Psy-trance. This has made them reach higher, play harder and come up with some really out of the box ideas for their sound. I particularly love ‘Savant on Mushroom’ which is an excellent start to Vol. 2 and a truly powerhouse IM remix highlighting their stupidly incredible talent as producers and musicians. If there was such a style as Math-Tech, this would be it. The complexity of the song is obvious, but even I get lost in the time signature changes, the incredible sound design and the exquisite attention to detail.

Similarly, the same could be said for the lead track of Vol.1 feat Hope 6, ‘Where Do I Belong’. As usual, the detail is painfully good with rasta-ised vocals penetrating the track with distorted crackling basslines and kicks right across its entirety. Thank the gods of techno, IM have come home!

It has shades of progressive trance, dubstep, drumstep, psy-trance and even plain old house in it and it should remind people how important these guys are to the underground electronic scene out there right now. I very rarely come across anyone who has heard of them, even now after 15 years. And that’s a good thing. They’re not David “My Hair Needs Its Own Limo” Guetta and his Swedish butt-buddy Avicii “I Need No Last Name Because I’m So Cool” Avicii, and the world is happier for it.

People attribute the death of psy-trance to Infected Mushroom, for some unfair reason, but these EPs show that its alive and well at Dim Mak. I’ll pay the guys for choosing the label and never resting on their musical laurels for this. Plus it gives me a chance to listen to more IM while I wait for next year’s album (if it ever comes).