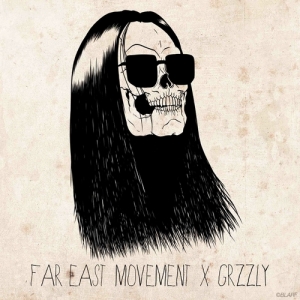 Mixtapes come and go and in a lot of ways, it’s a way for hip-hop artists to remind the fans and pundits they are still out there, and still relevant. Far East Movement, as one of the more underground offerings coming out of the US these days, are no exception. But Grzzly is something different. I tried my hardest to listen to and review the first offering from A$ap Ferg, highly touted as one of the best and brightest in the neo-rap Trap scene; but found myself just wanting to turn it off. But Grzzly, despite primarily being a collection of remixes and unreleased tracks, is pure Trap gold.

Far East Movement were born out of ‘Korea’ town in Los Angeles and share a love for West Coast hip-hop and eastern influenced flavour. As one of the bridge artists across eastern culture and sound and West Coast US style (Mc Jin, etc), FEM are definitely one of a kind. After releasing their phenom of an album ‘Dirty Bass’ and their former beast ‘Free Wired’, Far East Movement are on the cusp of breaking it big time. ‘Grzzly’ shows their versatility and their cohesive integration of every big bass style and sound. Crossing hard-edged Dubstep, sonically-brutal Trap beats and some of the tightest US rhyming in years; I’m finding this album more and more interesting – no less for the fact its free from Datpiff.com.

‘Grzzly’ features all of the better tracks of ‘Dirty Bass’ remixed Trap-style and honestly, some of them are truly better for it. ‘Turn Up The Love’ was a bit of a homogenous pop track on DB, but on this; its ghetto gold. Trap music is a bit of a hard sell because of its harder edged rap style, and for those not really into techno or hip-hop; it’s a freakin miracle to get people to even listen – so here’s one of the first drawbacks. It won’t convert anyone to hip-hop or techno, but then again; this won’t surprise many. What it does surprise is those wavering on the borders of listening to more Trap. This could be a good or bad thing depending on your slant. My slant? I’m no feeling Trap like I did Dubstep/Drumstep and I guess that’s saying something. I am, however, a big fan of the big bass sound of Far East Movement and I think this is a great teaser for the new album due out next year.

One of the best tracks of the album is the intense Trap version of ‘Get Up’. The track is originally by Bingo Players, but after listening to the track FEM tried their hands at adding vocals. After the incredible club success of the collaboration, Candyland took the op to remix it and what we have at the end is an intense Trap version of one of the biggest club tracks of 2013. This version takes it to another level incorporating FEM vocals over the secondary Candyland breakdowns and BPM changes. This is one of the reasons I love the new hip-hop/dance/remix scene. Things change so much; sometimes its hard to keep up but damn, it makes for an interesting ride for the hunters and crate diggers around the scene.

The mixtape features a bunch of exclusive tracks only found on the Datpiff upload, but most of them are pass-upable. I think the biggest tracks are those remixes and insights into the new album. Finishing off the album is a preview track off the next album and for FEM; it’s a tasty treat. Featuring artists such as RIFF RAFF from Diplo’s Mad Decent label amongst others, this is an album for the up and coming players.

Overall, the mixtape is great for a free taste and if it cost anything, I wouldn’t have bitten at all. I guess this highlights the best points mixtapes offer fans. For some, the mixtape is the chance to showcase their up and coming talent. But for others already in the game, the mixtape represents the chance to remind fans you’re not dead and create some kind of underground swell towards the inevitability of the next release. That’s where “grzzly’ lies. FEM haven’t gone anywhere, and for fans, this is a welcome reminder. For those not au fait with their sound, this is the taster you should probably hit up to give you a future point of reference to what they are capable of.