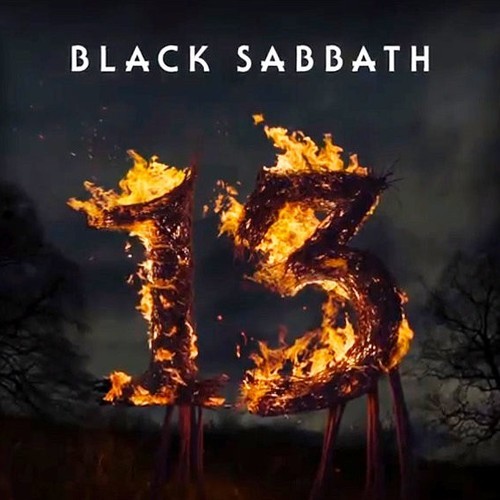 You’ve all heard the hype.  First album with Ozzy in 35 years, Brad Wilk of Rage Against the Machine replacing Bill Ward on drums, yet another metal album referencing the number 13, a huge world tour etc etc, blah blah.

Sure it’s big news.  Massive in fact.  The whole rock world has been salivating over the prospect of an Ozzy-fronted Black Sabbath since the news of “the second coming” was leaked a year or so ago.   For my part, I was sceptical to say the least.  Tony Iommi is ill with cancer, Ozzy is…..well, his history of gargantuan amounts of substance abuse is abundantly clear in his persona, and besides the recent addition of Brad Wilk, they’re all REALLY old!  Was my scepticism justified?  Are they still the kings of metal? Well….

13 wastes no time with intros or build-ups.  The opening track “End of the Beginning” roars instantly to life with a chugging riff from Iommi which is immediately recognizable as Sabbath.  This track (and most of the album really) as you’d expect, is mostly reminiscent of the band’s first 6 albums….their “classic” era if you like, and  this opening cut, while featuring some exceptional soloing from Iommi is…adequate at best.  Its relative lengthiness (8 minutes) leaves you wanting a change up fairly quickly.

Track two (and the first single release) “God is Dead?” begins rather ponderously with some slow picked guitar and a plodding beat.  Ozzy’s vocals, particularly in the lower registers, are very clumsy at times and almost border on comical.  At this stage, you’re beginning to think “Oh Christ this is gonna be CRAP!” but… cue the pre-chorus: Ozzy really begins to get into his groove as he wails “The blood runs free, the rain turns red!  GIVE ME THE WINE, YOU KEEP THE BREAD!” and CRASH!!!  There’s the riff we’re looking for!  Evil, menacing and with just the right amount of groove.  Iommi at his best!  From this point on the track improves immensely, undertaking a meandering journey through different moods and shades of heaviness.  No wonder they released this one as the single!

It’s a good thing “God is Dead?” is near the beginning of the album as it reassures the listener that this exercise wasn’t a complete waste of time (and let’s face it, time is not a commodity the original members have a lot of  in reserve).  From this point on, the album never does reach quite the same heights as on the aforementioned track, but there’s certainly no need to fling the CD out of the player after track two.  The rest of the material is good…without being great.  There are certainly some tasty riffs, and once you get your head around Ozzy’s vocal prowess (or lack thereof) there are some classic Sabbath moments that are sure to get your heads bobbing and your horns in the air!

As far as performances go, Iommi is the hero here, as he is in most of the Sabbath Catalogue.  I mean no disrespect to the other members, but he’s probably the most musically gifted of them and let’s be honest….it’s the RIFFS that are really memorable and keep us coming back for more.  Brad Wilk does his best to be inconspicuous behind the kit and plays “in the pocket” for the most part (besides an impressive flourish in “God is Dead?”).  No complaints there.  Geezer’s bass playing is actually quite impressive, he employs some pretty dextrous runs here and there and certainly hasn’t lost his touch.

My biggest complaint about this record is the production.  Far be it from me to question the mighty Rick Rubin, but the clean and modern production has none of the dark and menacing ambience that the early Sabbath albums had.  I mean sure it sounds “good”….the drums in particular are punchy as hell, but it’s just too….2013!  Where’s the reverberance?  Where’s the atmosphere that made those early albums sound like they were recorded in the dank and ungodly catacombs of some monstrous cathedral?  For an album that is essentially derivative of the band’s ’70s output (with a slight nod to No More Tears), it could really have done with some similarly minded engineering.

The best track (and riff) by far is “God is Dead?” as previously mentioned, but others to listen out for are the Planet Caravan-esque “Zeitgeist”, the pounding grooves of “Loner” & “Live Forever” and “Damaged Soul” which features some great harmonica playing that harkens right back to the likes of “The Wizard” from their debut album.

I can’t give this album a great rating, nor a terrible one.  The band, while clearly enjoying themselves, are caught between a rock and a hard place musically.  They simply could not have released anything experimental or self indulgent.  The fans want classic Sabbath, and that’s what they’ve got.  A bad review (or possibly even this review) will surely be met with cries of “it’s fucking brilliant you idiot, of course it is… it’s fucking SABBATH man!”.

Well, I don’t care who it is.  This album is reasonable, but if I want Ozzy fronted Sabbath I’m going straight to the unsurpassable brilliance of the band circa ’69 to ’75.