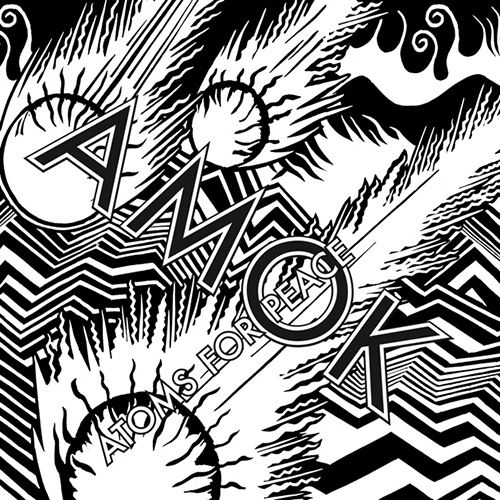 An electronic project featuring Thom Yorke of Radiohead and Flea of  The Red Hot Chili Peppers named after a speech by Dwight Eisenhower?  Hmmm…. This is the debut effort from Atoms For Peace (the band, not the speech, although the speech’s ’53 debut is not to be sniffed at!).

Of course, based on the appearance of Thom and Flea alone, many punters will be falling over themselves to snatch the cd from its record store display, then struggling to open the bafflingly robust plastic prophylactic sleeve, before accidentally stabbing their finger with scissors and damaging the cardboard cover in the process.  Unavoidable really.

A pretty formidable line-up for sure, but just how cohesive is the unit when tackling electronica?

Well, for a start there are many more elements to the music besides the electronic.  Vocals, acoustic guitar, electric guitar & bass and various percussion instruments are utilized throughout, and despite Yorke stating that the project came about as a result of “…getting together, getting wasted and listening to Fela Kuti”, it’s actually a really cohesive listen.

Immediately apparent is the influence of Afrobeat upon the rhythmic content.  The electronic snaps & pops and live percussion have a groovy yet jerky & offbeat quality which immediately disqualifies Amok as dance music per se.  It’s even slightly obtuse to label it as electronica  given the many organic sounds going on all over the disc.

Yorke croons and whispers throughout proceedings…no shouting or sneering…his vocal delivery is comparatively restrained, which is just as well because the album does not lend itself to angst or aggression in any way.

Similarly, Flea’s bass playing is very understated.  There’s not a trace of enthusiastic slapping or heavy funk playing.  Instead, he favours fingerstyle, with only the occasional vibrato and fretboard slide  causing the bass to stand out.   He plays very much “in the pocket” on Amok and were it not for the liner notes, we’d have no idea who was playing.

Godrich’s keyboard sounds are airy and atmospheric….not complex, but nicely composed and they tie the other elements of the disc together effectively.  Despite the percussion being mixed quite high, it manages to maintain an air of smoothness and refinement and never sounds skeletal or harsh.

As enjoyable as this album is, it has a definite soporific quality to it.  Many times while trying to analyse it, I found myself distracted or nodding off!  Strangely, this is not a bad thing at all.   There are no crashes or shocks and despite the slightly prickly sounding percussion, it ebbs and flows like whatever cliché you prefer to insert at this point.

Whilst attempting to dissect this album I had to laugh at the lyrics to the song “Default”…not because they’re funny, not in the slightest.  But because, as I began to drift into sleepy land, I’d hear Thom sing “…the will is strong but the flesh is weak!”.  Surely unintentional, but mention of this particular song brings me neatly to the point that it’s probably the best track on the disc.  It possesses a shiver-inducing chord progression complimented by a catchy yet plaintive vocal line which really wakes you up, if like me, you were drifting off at that particular  point in time.

None of the material varies stylistically that much, but there are other standout tracks.  “Stuck Together Pieces” is the most danceable track on the disc by a mile….although it’s still far too dreamy to be a dancefloor filler.

“Judge Jury and Executioner” and “Reverse Running” remind us just how much of a dance album this isn’t, with their unconventional time signatures and odd arrangements…almost like a chilled, electronic manifestation of Captain Beefheart.  The closing title cut is also worth a mention.  It brings the album to a conclusion effectively…and a little unsettlingly.   Yorke’s distant vocal harmonies blend with the creepy synth lines to create an aura of slight disquiet….not enough to spoil the mood of the album as a whole or spook the listener, but just enough to plant a seed of apprehension.

For an album that’s quite easy to listen to, Amok is very difficult to critique or even categorize.  Is it late night chill-out music?  Hangover reduction music?  Sleeping pill music?

1 thought on “Atoms For Peace- Amok”