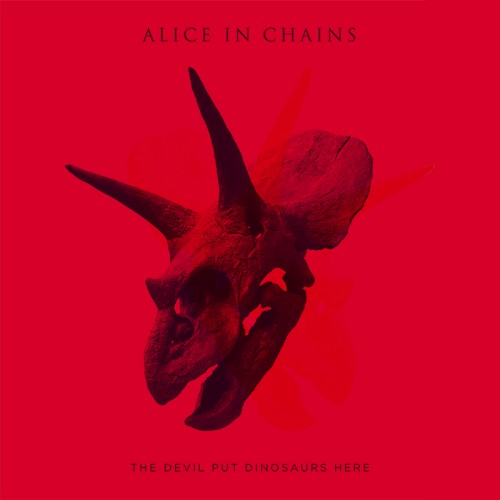 Generally, bands which lose their lead singer/focal point, whether it be to death or mere “artistic differences”, crumple into a heap never to be heard from again; relegated to the dusty archives of rock’n’roll history and Classic Rock FM radio.  Of course there are some notable exceptions, and Alice In Chains is one of them.

Original singer Layne Staley passed away from a heroin overdose in 2002, but rather than disband, the group forged ahead with new singer/rhythm guitarist William DuVall and it proved to be a very wise move indeed.

The first release with their new frontman (2010’s award winning Black Gives Way to Blue) was met with overwhelming critical praise and gold record status; almost analogous to AC/DC’s Back in Black 30 years beforehand.  Of course Acca Dacca’s output declined pretty sharply in quality after that album’s successor For Those About To Rock, but what of Alice in Chains?  Is this new record their meek equivalent to Flick of the Switch?

Well, within seconds of the muscular guitar riff  which bursts out of the first track “Hollow” you’re met with the strange yet oh-so-familiar sound of DuVall’s layered vocals.  Geez he almost sounds like Layne… not quite so nasal perhaps, but certainly similar enough to make the first few tracks a little unnerving until your ears and psyche adjust.

Speaking of unnerving, the band have NOT held back on this release.  It’s heavy…perhaps the heaviest thing they’ve done.  Guitarist Jerry Cantrell handles most of the songwriting duties and it shows; there are some truly awesome riffs on this release.  Heavy and chunky.  Angular and aggressive, yet with plenty of bluesy playfulness and conversely some dark & haunting bell-like moments worked in to keep it from stagnating or seeming one dimensional.  His soloing is also most impressive, giving many of the songs a lofty soaring quality that’s a perfect counterpoint to the rumbling crunching riffs below.

Cantrell is definitely the man, but the rest of the band are equal to the task.  DuVall’s singing, as mentioned previously, evokes the spirit of Layne Staley, but it’s different enough to make the band sound fresh and inspired.  This does NOT sound like a band in their 25th year of existence!  The relentless rhythm section of Sean Kinney and Mike Inez (drums & bass respectively) give Cantrell’s riffs an indispensable propulsion and weight, and in doing so form the true nexus of the record.

The overall sound of the album is reminiscent of the band’s “classic” era (thanks in no small part to DuVall’s vocal delivery), but they’ve gone to another level in terms of songwriting, harmonic & rhythmic diversity and sheer thundering heaviness!

As far as the lyrical content goes, you need go no further than the title track:  “The devil put dinosaurs here / Jesus don’t like a queer / No problem with faith / Just fear.”  Nuff said.

The production has a digital sheen to it that even Black Gives Way to Blue didn’t have….analogue purists fear not though….the overall sound is excellent with the possible exception of the snare drum which is a little too “snappy” for my tastes, however this could be a deliberate tactic to evoke the sonic harshness of the band’s early albums

The disc is not utterly flawless from start to finish, it could probably have done without a couple of the lesser tunes, but there are some absolutely terrific tracks.  The title cut for example, despite its relative lengthiness, is gloriously spooky with Cantrell achieving more with one string bend than most guitarists could in a whole album!

“Phantom Limb” is a pounding epic which sounds for all money like Slayer and the Bee Gees jamming on a Melvins song! And “Breath on a Window” & “Pretty Done” are both perfectly grungy power pop with some brilliantly tasteful soloing from Cantrell.

Possibly the standoutiest (add it to your dictionary) track is “Stone”.  A heady mix of bone crunching riffs, melodic solos, soaring vocals and just a touch of Dillinger Escape Plan intensity (!), it’s a shining beacon to what this band is capable of circa 2013.  Black Sabbath, if you were looking for the missing riffs to “13”, here they are!

This record is a resounding success.  Not only because of the treacherous path the band have had to tread in order to reach this point in their careers, but also because it generously serves up plenty of treats for metalheads, guitar nerds, grunge fans, power poppers and  anyone even remotely interested in the heavier side of music.

1 thought on “Alice In Chains- The Devil Put Dinosaurs Here”