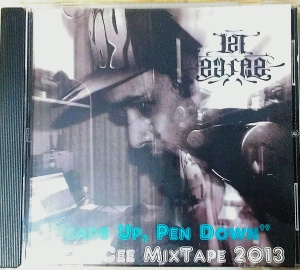 Lee Emcee – Heads Up, Pens Down

There’s a bit of an interesting story behind how I came across this album and as always I guess it comes down to my love and knowledge of seminal nineties hip-hop. Lee posted a question offering up a copy of his new mixtape for a post of what I thought would be the best choice in hip-hop and if he was feeling it, he would post out a CD for free. As fans of my classic Sunday morning hip hop segment would know, this is the sound of my underground youth. Of course I picked a winner, ‘Souls of Mischief – ‘93 Til Infinity’ from the best hip-hop era of the nineties, Oakland/San Francisco. But after being mailed out the album, I was wondering what I would get.

Sounding like early Lyrical Commission or Certified Wise beginnings, ‘Heads Up, Pens Down’ reminds me very much of early Strut and Simplex stuff harking back to the golden era (not the Hilltop label) days of the mid to late nineties in Australian hip-hop when artists found their accents and really started to evolve from the stereotypical image of the BBQ rap scene. But from Lee’s very iconic oz hip-hop voice, the guesting begins and shapes what is ultimately a true diamond in the rough.

The choices in guests are huge for an underground mixtape and something which highlights the amount of time it took Lee Emcee to put it together. Taking roughly three years has not been detrimental to the album. Choices such as Scotsmen MC Werd and Bright Sparks are very good additions to the mixtape which a lot of surface hip-hop heads would miss. But for those in the know, these are two very important MCs in both the past and present of underground hip-hop worldwide. They add something very global to the sound, despite being not very well known and this can also be said about one of the biggest killer tracks on the mixtape, Earth’s Mightiest Avengers ft Danny Darko, Mark Wayne, Skillyt and Gatsby. The four US MCs make this reminiscent of hieroglyphics styles rhymes or other So-Cal rappers of the late nineties.

‘Head up, Pens Down ft Bright Sparks’ brings it perfectly with the one and only MF Doom on the beat. Bright Sparks as mentioned above, is one hell of an MC. Similarly, the beat makers are a mixture of some of the best old school and new school producers. None of this detail is expressed in the CD insert and has only come from a little clandestine trawling of Lee’s facebook page. But he has managed to add people such as DJ Premier, MF Doom, Pretty Lights, Jazz Liberatorz and more. Pretty Lights production on ‘Structured Morals’ is a cut up of the sometimes overused Etta James track ‘Something’s Got A Hold On Me’, but is one of the best I’ve heard yet and scratches it back to simplicity with no fucking Flo Rida in sight, thank fuck.

The politics and social commentary of ‘The Way We Act’ is refreshing and pushes against the rest of the mixtape of generally introspective and personal stories. This is a good thing though, because as it comes up in the mixtape, at track 15, its high time for a change.

Overall this is a very good mixtape for someone still very much in the underground scene in Brisbane. Having said that, I’ve been listening to Australian hip-hop for more than 15 years now and in that time there is an iconic sound I typically associate with the style and this album has it. It might be too raw for many people who maintain a love of Hilltop Hoods or Bliss n Eso, but for those looking for something truly fresh; grab yourself a listen through Youtube or Triple J Unearthed before you make up your mind, but I can seriously recommend it to the true hip-hop heads. Lee Emcee will be one to watch in the future alongside some of my other favourites kicking about such as Mr Hill and Rahjonkahs, Unda Dwella and Dwizofoz. There’s a few trip ups in the production and the lyrical flow, but nothing most people will notice. What it does have, in piles and pile of, is heart. Heart for music, heart for hip-hop, heart for the underground.