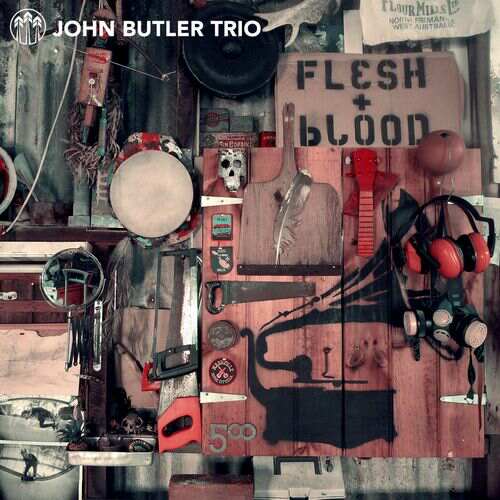 ‘Flesh and Blood’ is the 6th studio album from Australian godlike musician John Butler and his ever changing trio of troubadours. By this time in his career you would expect an album like ‘Flesh and Blood’, which has reduced the core message of the previous five albums into a rich jus of expensive cognac styled production. While previous albums like ‘Sunrise Over Sea’ and ‘April Uprising’ were the Courvoisier VSOP and XO, ‘Flesh and Blood’ is the Hennessy Richard. Its refined, measured and perfect on the palette. From the minute the album starts, you know what you’re listening to. John Butler’s iconic voice and Nicky Bomba’s drums are a combo you just can’t beat, but with Bomba departing from his Brother-in-law’s band to focus on more personal stuff such as Melbourne Ska Orchestra, will the sound remain?

‘Flesh and Blood’ ranges from the stompbox roots and dirty blues we so keenly associate John Butler Trio with through to the more laid back and meandering slide guitar and fuzzed out sounds making more and more of an appearance in his albums of late. Its been four years since ‘April Uprising’ but it feels like only yesterday I was picking it up off the shelf and in an almost direct sequel, ‘Flesh and Blood’ warms the cockles of my Lazy Sundays heart. The overall texture and feel of the album reminds me why he holds a special place in the landscape of Australian independent music. Its sounds truly effortless. Like a lot of Butler’s work, its been played from one end of the country to the other to perfect the sound before the studio mics even hear a note. Much like Blue King Brown and Xavier Rudd, the tracks seamlessly feel old and new at the same time.

But while the sound has evolved, it sometimes feels like almost every album they’ve produced before. Like I said above, it’s a flavor you know, just smoothed, filtered and refined into its purest essence and for that I am grateful. I needed this album something fierce. I try to get out to every JBT gig I can get to these days, even if they are now becoming few and far between. Mainly because I think they are the epitome of how live music should be performed. Raw, sexy and dirty amplified blues and slide guitar.

Standout tracks on the album are many, but several fight their way to the top of the pile. “Blame it on Me” brings a deep bass reggae style to the formula that John Butler have touched on before but rarely explore. It’s a sound I wholeheartedly encourage for them, if only to hear more NZ-esque dub styled blues. Similarly the politics makes a comeback in the awesome track “How You Sleep At Night”. Something I have not seen them do since “Gov Did Nothing” a ways back. Its not the stanking blues/roots standard to the track but the driving drums and rising tempo breathe life into the message and keep the pulse in the album right to the end. Finally, the exquisite and tear jerking story of “Wings Are Wide” tells the story of Butler’s grandmother who, upon the death of her loving husband, promised to bequeath his favorite guitar to the child best suited to it. Butler calls it the guitar in the stone, because no-one could get it from her until the day she gave it to a pimply 16-year-old who was in love with the Smiths and the Cure.

It’s a very introspective album which highlights Butler’s progression into a man with children, a brighter view of life and a life which has been better spent at home with family than out on the endless touring road. And for that, ‘Flesh and Blood’ is almost like a culmination of what we love about him, what we remember of him and where we see him going on his path in musical life.