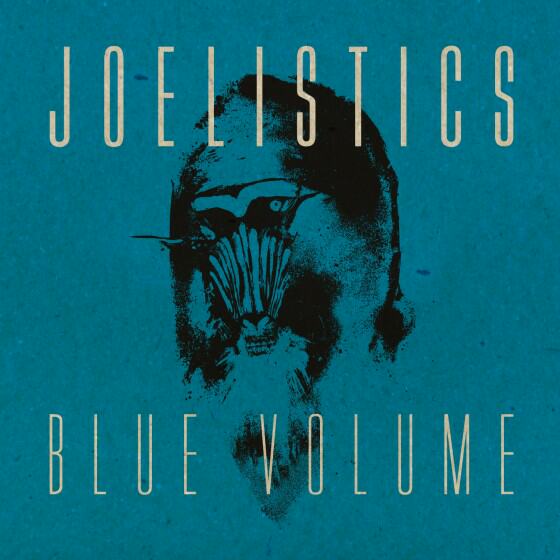 I’ve been waiting quite a while for this one after the incredibly honest and raw solo release several years ago, which put Joelistics well outside his former group’s shadow. TZU were one of those groups that Australian independent music embraced, even though they were part of the Gudinski juggernaut. I used to put TZU on par with the best stuff coming out of labels such as Elefant Traks and despite being on Liberation, I always felt their home was with ET. So its fitting that after the effective dissolution of TZU, with pairing MCs Pip Norman and Joel Ma going in different directions, Joel would resurface on Elefant Traks. But Voyager was incredible. It had maturity, intelligence, top-level production and power to the lyricism which highlighted Joel’s bush poetry slam thought patterns. But what of Blue Volume? Is it more of the same or just a weakening of Joel’s creativity?

Well my friend, you are in for a treat. Blue Volume is not only better, but rawer (if that’s possible) and far more intense.  Just going to show that one person’s pain is another person pleasure, Blue Volume is an intensely personal journey across the world and through the past. A bitter relationship breakdown saw the man travelling to feed his soul and along the way we are so much better for it. Crossing genres and styles from 80s punk and 90s grunge hardcore right through to some liberal vocoder pop music and back through the golden era of hip-hop and funk, Blue Volume is more than just a personal journey; it’s a window into one man’s inner workings.

There’s a pretext to this album, a breakdown for which details are only known by those around them, the passing of a dear friend and one of the hottest summer’s in Berlin in decades all leading to being robbed of a laptop with the original album material on it. That Blue Volume even eventuated is a testament to the strength of character, the passion and the downright stubbornness of Joel for what he describes as one of the only constants in his life; music. And I’ll try not to revel or slovenly indulge in another’s pain, but this is what makes Blue Volume worth every minute of your time. I found Voyager to be on the same tip; with stories weaving their way through its length dragging me back time and time again – just one more listen it would say. Yet with Blue Volume it’s you that returns. Sure the album is what it is; but the effect it has on the listener is evident. You need to listen to it again and again. To sympathise, to empathise and to minimise your own pain. Blue Volume is there for you, waiting.

It’s really hard to isolate any particular tracks on the album which are better than the rest but a couple really jump out on their own. ‘Not In My Name’ is the track I will make other’s listen to for it breathes the same thoughts I do about the treatment of refugees and the beautiful story telling which accompanies it. Much in the same way The Herd’s ‘Shihaba’ hit me, I just stopped, breathless, waiting to hear it all. It’s enough to bring tears to your eyes. Yet across the entirety of the album, every track on Blue Volume evokes a similar feeling. I’m not normally one to rely on press releases to give me a definition of an album but with this one; I’ll let E-Traks describe it best. “At its heart Blue Volume is a celebration of our inherent flaws; a tribute to old friends, lost love and a document of the frustration of an outcast bewildered by a deteriorating political and social landscape.” Joining Joel on ‘Nostromo’, one of the finest cuts on the album, is Wil Wagner (The Smith Street Band), in one of the powerhouse tracks in the middle of the album which lingers in your mind long after its end. This is the power of the album, It lingers, long after its end.

Technically brilliant, exquisitely written and oh so gorgeously produced; Blue Volume is hard to fault. Scoring an album like this is actually harder than you think. The tendency in these moments as a reviewer is to try to find some fault in order to justify allowing it to fall short. We spend so much time finding fault in others that we forget that our scores mean nothing to anyone but ourselves. Blue Volume has touched me on a deeper level and I think there’s nothing more I can do. With ‘Voyager’ I was enamoured, feeling embraced by new love. ‘Blue Volume’ is the engagement ring and proposal and the thought of a life lived long in love and with it; I say “I do.”