Sometimes as jaded reviewers it takes a bit to get our attention, but every now and then something as simple as a band’s bio is enough to pique our flagging interest.
Any band who describe themselves as “a daggy, spontaneous, ridiculous, over the top, wild, obscure, juvenile, gormless comedy train wreck metal rock band that have been making massive amounts of minus-money in the music industry since 2008” is worthy of our attention surely!
The Aussie lads have indeed been laying waste to music venues around the country with their unpredictable and riotous stage shows for some time now, and if you’ve not had the pleasure of seeing them (as I haven’t) you’re bloody well missing out… or so I’d imagine.

‘Commando Too’ is the band’s second full length effort, following on from 2013’s “Husband” LP which featured the brilliantly titled single “Punching Dicks”… and with new song titles like “I Need Rehab” and “Stool Bender” you’d assume that this album will be fairly devoid of any self-seriousness whatsoever… and you’d be right.
However, the band are well versed in the serious business of writing riffs that’s fer damn sure… so much so that more than one song is lyrically dedicated to the art of riffery. Taking the prize for this is the opening track “Son of a Riff” which features some hilariously off-kilter ‘call & response’ turns of phrase and non sequiturs, not to mention some smoking 6 string work… Smoking is wrong!
Yes smoking is wrong,
unless you’re smoking on a riff
Put your riff in a bong!
No, writing a song you chop up a bunch of….er… sorry, damn catchy tunes!

The slightly puerile scatalogically-obsessed poos & wees lyrics may give some listeners the shits (pun intended) after a while and the band do fly off on some baffling tangents like the electro-funk nonsense of “Hi Viz” and “What is Wrong With Me?”. The latter’s title does offer a fairly valid explanation though… and to be fair it does follow “I Need Rehab”… well whadaya know, it’s a concept album! Silly me.

To be honest though, the band are at their best when they’re smashing out the sort of killer riffage contained in songs such as “Grip It”, “Ayy Ayy” & “Son of a Riff”, and sounding for all money like the bastard car-crash offspring of Helmet and Kevin Bloody Wilson.
This isn’t the kind of album which lends itself to in-depth analysis: it’s just good old fashioned laugh-out-loud fun. The band are clearly having a ball (Matthew’s sweaty ones?) and their wit & energy translate pretty darn well through the speakers… I can only imagine what kind of mayhem ensues at their live shows… and you can conveniently find out for yourselves as the band are undertaking a national tour!

Despite a couple of misses in the humour department (although senses of humour are subjective and it’s been suggested I don’t actually have one) ‘Comando Too’ is a mosh-along, piss-yer-pants-laughing feast of metal riffery and good times rock & roll.

Check out I Am Duckeye ‘s official page for more music/info & give ’em a like on Facebook! 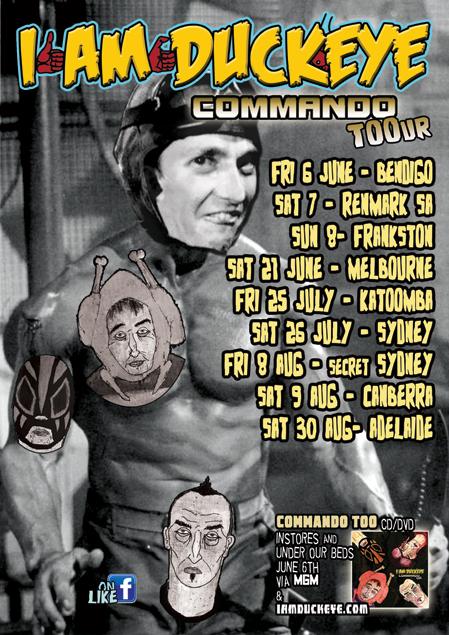 1 thought on “I Am Duckeye- Commando Too”